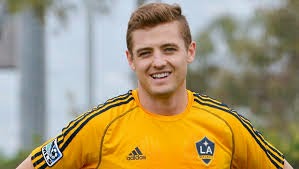 LA Galaxy soccer star Robbie Rogers changed the face of sports in 2013 when he became the first openly gay athlete in the five major North American sports leagues. In his new book, "Coming Out to Play," he describes the pain of living in the closet — and in an interview airing on TODAY Tuesday, he told special correspondent Maria Shriver what he thinks needs to change in sports so that every athlete, gay or straight, feels part of the team.
Rogers' good looks and quick feet made him a fan favorite, but the culture of sports left him feeling isolated and ashamed as he secretly struggled with being gay. As a college player, "I heard, 'Don't pass the ball like a faggot,’" he told Shriver. “[It] made me think, well, I’m never coming out and playing this sport, because when they find out, they’re not going to want to be my coach, or I'm not going to be able to play soccer anymore."  he first openly gay male athlete in the five major leagues talks with NBC news special anchor Maria Shriver about his new book, “Coming Out to Play,” is which he shares his secret struggle with being gay.


After Rogers left college to go pro, locker room conversations about women and sex made him feel he had to keep his secret. "Someone would ask me a question and I'd be like, 'Oh gosh, I gotta lie about this.' And then I would go to the extremes of like, dating girls and, you know, sleeping with girls. When you have to hide that much and lie about [it], it creates this monster inside you."
He told Shriver that it wasn't until his mid 20s, when he dated boyfriend Greg Berlanti and came out to his family, that he finally found happiness. "From the moment I told my sisters and my mom and my dad, they told me, 'We love you so much. This doesn't change anything for us, and you were created this way.'"
But Rogers was still terrified to be an "out" athlete. He quit soccer and gave his support to groups like the Gay, Lesbian & Straight Education Network (GLSEN). Speaking to young gay men and women, "I realized just by playing again on a soccer field, there's a symbol right there that can encourage and give people hope," he told Shriver.
In 2013, Rogers signed with the LA Galaxy, becoming the first openly gay male athlete in major league sports. But to his teammates, he's just one of the guys.
"Robbie's a good soccer player, you want him on the team, simple as that," said his teammate A. J. DeLaGarza.
"He's a soccer player first and foremost, who happens to be gay," agreed Galaxy goalie Brian Rowe.
Rogers just signed a new contract with the Galaxy, who are now competing in the MLS playoffs. His family and boyfriend will be in the stands, cheering him on. He said that when he came out as gay, he expected to be contacted by other athletes still in the closet. But so far that hasn't happened. That's why he wrote his book, which comes out today, he says — to change the culture of sports.
"What would you like to say to coaches today who are coaching high school, college, and professional sports?" Shriver asked him.
"I would tell coaches, 'You probably have a gay player,'" he replied. “Be aware of what you're saying and what you're putting in their minds, because from a very young age, that stuff will
stay with them.”
Today show
For more support and resources for LGBT youth and their families, go to:
Over 5.6 Million Reads Adam Gonzalez at November 26, 2014

Email ThisBlogThis!Share to TwitterShare to FacebookShare to Pinterest
Labels: Coming Out (USA), Gay in Sports