This Pope is The Most Pragmatic He Knows Same Sex Marriage HAS to Come, Therefore He Speaks of it with Diplomacy


VATICAN CITY (AP) — Pope Francis waded diplomatically into the gay marriage debate Friday, telling the Archbishop of Canterbury he wants to work together to promote family values "based on marriage."
Francis, who vigorously opposed gay marriage in his native Argentina, and Archbishop Justin Welbychatted, prayed and had lunch together at the Vatican in their first encounter since both were installed in March. 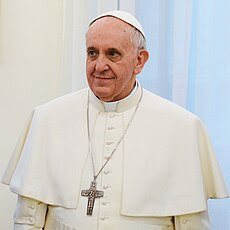 Welby, the spiritual leader of the 77 million-strong Anglican Communion, has opposed proposed legislation in Britain that would legalize gay marriage, saying it seeks to abolish and redefine the institution and would weaken one of the cornerstones of society.
He delivered a speech last week before the House of Lords before it moved the gay marriage bill one step closer to becoming law. The legislation would enable gay couples to get married in both civil and religious ceremonies in England and Wales.
In his remarks to Welby, Francis said he hoped they could collaborate in promoting the sacredness of life "and the stability of families founded on marriage." He noted that Welby had recently spoken out on the issue, a reference to his House of Lords speech.
Significantly, though, Francis didn't specify that marriage should be based on a union between a man and woman, which is how Benedict XVI and John Paul II routinely defined it in a way that made clear their opposition to same-sex marriage.
Vatican officials said Francis' phrasing was a diplomatic attempt to make his point without making a provocative pronouncement, particularly during an inaugural meeting with Welby that was aimed at getting to know one another. Francis though has steered clear of the gay marriage debate as it has recently roiled France and Britain, and in general has refrained from making headline-grabbing public comments on hot-button current issues.
Welby said the pope's remarks, both in the public speech he delivered and their 30-minute private meeting, showed that "we were absolutely at one on the issues, and equally at one in our condemnation of homophobic behavior and our sense that the essential dignity of the human being is where you start."
As archbishop of Buenos Aires, the former Cardinal Jorge Mario Bergoglio didn't shy away from voicing strong opposition to gay marriage, though he was pragmatic in sensing Argentina was heading in that direction.
Realizing the church couldn't win the fight outright, Bergoglio urged his fellow Argentine bishops to lobby for gay civil unions instead, according to the then-cardinal's authorized biographer. The bishops shot down the proposal and the church lost the issue altogether when the South American nation legalized gay marriage in 2010 — the first country in the region to do so.
Bergoglio once called gay marriage an "anthropological step backward."
"If there's a private union, then third parties and society aren't affected," he wrote. "But if they're granted marriage rights and can adopt, there could be children affected. Every person needs a masculine father and a feminine mother to help them settle their identity."
Anglicans split from Rome in 1534 when English King Henry VIII was refused a marriage annulment. For decades, the two churches have held theological discussions on trying to reunite, part of the Vatican's broader, long-term ecumenical effort to unify all Christians who have separated from Rome over the centuries.
Friday's audience was very relaxed and Welby acknowledged the novelty of the experience for both of them. They were installed within days of each other in March.
"I'm getting used to this, are you getting used to this?" he told Francis as he sat down to chat in the pope's library.
After the visit the two delegations had lunch in the Vatican hotel where Francis lives. While Francis is known for his spartan style and habits, he ordered up a five-course, fish-based lunch for his guests: swordfish slices, pasta with prawns, tuna steak, ice cream, fruit and coffee.
"He was very generous to me," Welby quipped when asked how such a menu squared with Francis' own simple temperament and the generally mediocre reviews given the hotel dining room.
/news.yahoo.com