Why Does The GOP Fiscal Hawks Want to Give The Army Expensive Tanks THEY Don’t WANT??

Why are These Hawks willing to cut almost anything as long as it doesn’t inconvenience them. SS, Medicare , Food Stamps, Libraries closing, Hospitals..No end..and no budget. But since they know more than the army about what they know, they want to shove it down their throats. I ask why but is rhetorical. I know why. These companies that make this equipment, the weapons complex production machine (sits on private hands) they already paid these misfits Senators and few Representatives already. They have been lunched, massaged, entertain, sexed and put to bed How many times? Their houses already nicely built with what money and if any loans? No interest. They need to come up with their side of the bargain and Produce.  That’s what you do when you have been bribed. No for the country, yes for the Pentagon weapons complex. So the Army…well they are paid to fight and die not to think. This is for the senators in those committes’  to do their pocket duty senators. Which senators? Google it or Bing it….names is no prob. 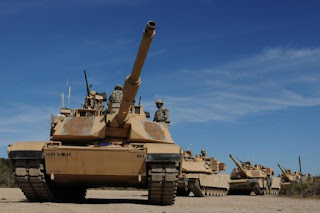 There is a $436 million dollar program that senior Army officials have repeatedly said they do not want to proceed and would make an excellent measure for cuts or payments for other services. The problem? Congress refuses to listen and is insisting they spend this money that they do not want.

As talks of how to cut spending and government waste have become the normal modus operandi of debate on Capitol Hill, a curious little show is playing out within the halls of power in Washington that provides a demonstration of the difference between rhetoric and the reality of attempts to cut spending.
The program in question is an upgrade to the M1 Abrams main battle tank. General Raymond Odierno, a 37-year Army veteran, told the Associated Press, "If we had our choice, we would use that money in a different way." Nearly two-thirds of the Abrams tank fleet has already been upgraded and the Army has signaled that future upgrades to the fleet are not needed. The current plan is to allow the current tank fleet to suffice until a new tank is developed and production starts around 2017.
"The Army is on record saying we do not require any additional M1A2s," said Davis Welch, deputy director of the Army Budget Office.
Yet two of Congress's biggest deficit hawks, Senator Rob Portman (R-Ohio) and Representative Jim Jordan (R-Ohio), are champions of the measure. They claim that they have a better view on defense issues then the Department of Defense and that stopping the project would result in difficulty restarting the supply line. Jordan said if "it was not in the best interests of the national defense for the United States of America, then you would not see me supporting it like we do."
Portman claimed, "That supply chain is going to be much more costly and much more inefficient to create if you mothball the plant."
Does the Depart of Defense know best with regards of identifying wasteful defense spending, or are they being too hasty, as many in Congress think?
Let us know on Twitter at @policymic or in the comments below.
Over 5.6 Million Reads Adam Gonzalez at April 30, 2013