By MARGOT PEPPER
Fred Stoller, the actor known for playing goofy roles including Gerard on Everybody Loves Raymond, has opened up about a failed one-night stand he had with fellow comedian Kathy Griffin.
In his new book Maybe We'll Have You Back: The Life of a Perennial TV Guest Star, the 55-year-old talks about the disastrous fling with his Suddenly Susan co-star, which involved the redhead begging him to let her hit him in the face.
'Apparently she had just seen a TV movie about a woman who battered her husband,' the actor recalls, 'which gave her a craving to do the same.'

In his book, which was released on April 1, Mr Stoller also talks about the party in 1992 where he first met the actress, now 52.
More odd behavior from the actress ensued. 'She seemed to have gone out of her way to make me miserable on our dates,' says Mr Stoller. Nonetheless, Ms Griffin apparently made no secret of her attraction to him at first.

'After some small talk I don't recall, Kathy Griffin asked me to drive her to her car where she made it easy for me to make out with her,' he writes.
The actor illustrates the peculiar moment when he picked her up for their first date, 'We stood there not even two minutes deciding what we should do, when she announced, "I'm wet,"' he recalls.
'She seemed to have gone out of her way to make me miserable on our dates'
And when the pair slept together for the first time, her penchant for violence was revealed when she asked him to let her punch him in the face.
'Why do you want to do that?' the actor asked at the time, to which Ms Griffin responded: 'I have hostility towards men. They rape, watch porn, and go to strip clubs.'
But this wasn't the only bizarre moment during their ill-fated one-night stand.
The actor says just moments after her odd request, they were lying peacefully in bed when she suddenly exclaimed: 'Stop looking at my a**!' 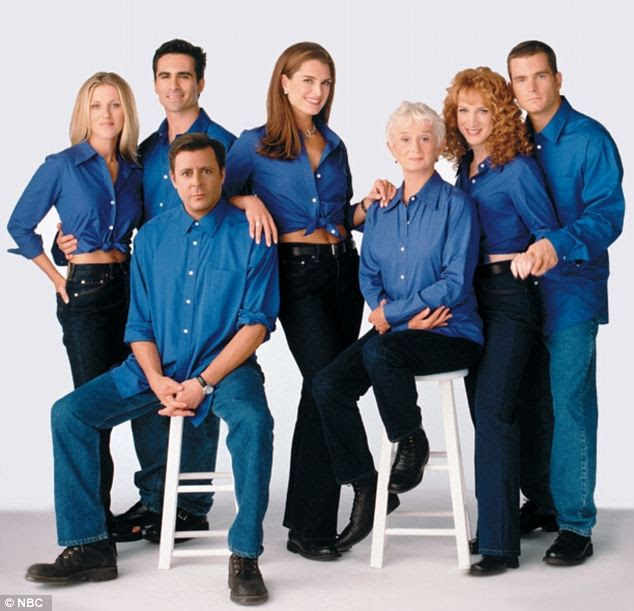 Mr Stoller's autobiography talks about his perennial gig as the 'guest actor' on numerous sitcoms, in which he most often plays the 'oddball character'.
His most notable roles include Gerard on Everybody Loves Raymond, Stu the waiter on Friends, and Hank on Suddenly Susan, which saw him co-starring alongside Joan Rivers, Brooke Shields and Kathy Griffin.
While he expected Ms Rivers to be 'a pampered whiny woman', he soon discovered that she was kinder than her reputation suggested.
'When I told Joan that my mother was unhappy that I was portraying "a gay," she demanded to have her phone number,' says the actor.
Instead, he found Ms Griffin to be the troublesome one on the show - which aired from 1996 to 2000 - after she constantly berated him for the way he portrayed his homosexual character.
'After rehearsals, she'd come up to me and say, '[I] see you and Bill aren't holding hands. You're being so homophobic. You should be holding his hand more,' he writes.
Mr Stoller was only on five episodes of the series, but he says even after it was cancelled, he had one last run-in with the actress.
A representative at Ruffles Potato Chips wanted him to appear in a commercial as Ms Griffin's boyfriend, he recalls in the book.
But his agent called him soon after to inform him that the actress had pulled the plug on the ad.
'Kathy nixed me from the role, because she wanted someone "more macho" playing her boyfriend,' he writes.
It's not the first time the actor - who also plays Fred the Squirrel in DreamWorks' The Penguins of Madagascar - has turned his hand to writing.
In 2012, he published an e-book entitled My Seinfeld Year, detailing his experience as a temporary staff writer on the popular show.
Read more:
Over 5Million Reads Adam Gonzalez at April 25, 2013