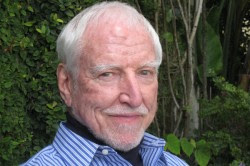 James Hormel — the nation’s first openly gay ambassador — questioned the sincerity of an apology that former Sen. Chuck Hagel (R) issued on Friday over anti-gay remarks he made in 1998. Hormel pledged to oppose Hagel’s confirmation as defense secretary unless he affirms before the Senate that he will support equal rights for LGBT military families.
Speaking with the Washington Blade from his San Francisco office, Hormel criticized the apology that Hagel issued for calling Hormel “openly aggressively gay” — because it was sent only to media outlets.
“If there is an apology out there in the universe, it hasn’t reached my office,” Hormel added. “So, until that time comes, I’m just doing my work here. When I see an apology, then I’ll consider it.”
Hormel, who since serving in his post in Luxembourg has become a philanthropist and major political donor, further criticized the statement because it was delivered 14 years after the remarks were made and comes at a time when the former senator is seeking high office. President Obama is reportedly considering him for the role of defense secretary, but hasn’t yet made any announcement.
“Fourteen years gives one plenty of time to reconsider and make whatever amends one might wish to make, and there were none made until yesterday,” Hormel said. “Given that he is under consideration for a presidential appointment, one can only wonder [about] the sincerity of the apology — but I haven’t seen the apology, so I can’t even comment on it. I’ve read about it, but I haven’t seen it.”
The apology from Hagel was published in several mainstream media outlets on Friday after questions were raised about Hagel’s commitment to LGBT rights given his anti-gay voting record as a U.S. senator from Nebraska.


“My comments 14 years ago in 1998 were insensitive,” Hagel was quoted as saying Friday. “They do not reflect my views or the totality of my public record, and I apologize to Ambassador Hormel and any LGBT Americans who may question my commitment to their civil rights. I am fully supportive of ‘open service’ and committed to LGBT military families.”

Despite the statement, Hormel said he would oppose the confirmation of Hagel as defense secretary if he doesn’t assert during the confirmation hearings that he supports open service for gay and lesbian service members and pledge to support LGBT military families.
“I think that if he doesn’t answer that question in hearings, then I would oppose his nomination,” Hormel said. “If through the course of hearings, he didn’t make it absolutely clear that No. 1, he supported the repeal of ‘Don’t Ask, Don’t Tell’ completely and No. 2, that he stands behind the families of LGBT service members to ensure their full rights as citizens, I would oppose his nomination.”
Hormel’s call for answers from Hagel come at a time when LGBT rights supporters are pushing the Pentagon to grant additional partner benefits to gay service members — such as joint duty assignments, issuance of military IDs, use of the commissary and family housing — through an administrative change in addition to the implementation of open service by transgender people.
Even though Hagel’s anti-gay remarks were published 14 years ago, Hormel recalled them with distinct clarity, saying he “was deeply disappointed and offended by it because I had just met the senator.”
Prior to their publication, Hormel said he spoke with Hagel in the senator’s office in a meeting arranged by then-Sen. Bob Kerrey of Nebraska. Hagel had previously voted to report out Hormel’s nomination to the floor as a member of the Foreign Relations Committee. At the time, Hormel said he heard no qualms from Hagel about confirming an openly gay U.S. ambassador.
“He was aware several of his colleagues had put holds on the nomination and indicated that he would do what he could to do to see whether he would have them removed, or in some other way, bring the nomination to the Senate floor for a vote,” Hormel said, “Now, four weeks later, the day before the Fourth of July, this article appeared. So, it was deeply disappointing for me at the time, and I did not understand where in the world it had come from. It certainly did not reflect on the conversation that we had had in his office.”
The Senate didn’t confirm Hormel and then-President Clinton assigned him the post through a recess appointment.
“There were people both in and outside of the Senate who were determined to see that I did not get a vote because they knew as well as I did that I would win the vote,” Hormel said. “And they didn’t want to see that happen.”
After Hagel issued the apology, the Human Rights Campaign issued a statement of appreciation. HRC President Chad Griffin said, “Sen. Hagel’s apology and his statement of support for LGBT equality is appreciated and shows just how far as a country we have come when a conservative former senator from Nebraska can have a change of heart on LGBT issues. Our community continues to add allies to our ranks and we’re proud that Senator Hagel is one of them.”
Asked whether he thinks that statement was wise for HRC to issue, Hormel said, “I haven’t read the HRC comment. I haven’t even gotten through the New York Times article yet, so I can’t really comment on what HRC has put out.”
After the Blade read the statement to him, Hormel still had no comment, saying HRC makes the decisions that the organization thinks are best for its mission.
“I need to see the full commentary before I say anything about it,” Hormel said. “I think that HRC’s mission is to see that LGBT citizens are treated as citizens like everybody else, and if they see the statement they put as a means toward that end, then they’re doing what they’re doing.”
Despite questioning Hagel’s sincerity, Hormel wouldn’t completely discount his apology, saying it represents a “watershed situation” in terms of the commitment public officials must have to LGBT equality if they are to win higher office.
“I think that this is kind of watershed situation because I don’t recall ever before that a nominee for a position like secretary of defense has issued any kind of apology, especially to a group of people who are still second-class citizens in the eyes of government,” Hormel said. “So, I do think there’s some significance to it; I’m sorry that it’s coming at a time which gives rise to questions about how insincere it is.”
UPDATE: Subsequent to interviews with the Washington Blade and the Washington Post, Hormel addressed the issue on his Facebook page, making a shift from his comments to the media:

Senator Hagel’s apology is significant–I can’t remember a time when a potential presidential nominee apologized for anything. While the timing appears self-serving, the words themselves are unequivocal–they are a clear apology. Since 1998, fourteen years have passed, and public attitudes have shifted–perhaps Senator Hagel has progressed with the times, too. His action affords new stature to the LGBT constituency, whose members still are treated as second class citizens in innumerable ways. Senator Hagel stated in his remarks that he was willing to support open military service and LGBT military families. If that is a commitment to treat LGBT service members and their families like everybody else, I would support his nomination.

as posted on Washington Blade.com

Previous posting on Hagel and Mr. James Hormel at adamfoxie*