How the Pentagon Is Betraying Its Own Standards 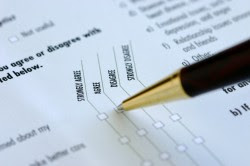 Remember when the military was tough? Apparently, those days are over. Judging from the survey they’ve sent to 400,000 active service members asking how they feel about repealing "Don’t Ask, Don’t Tell," the Pentagon is now run by a bunch of neurotic hand-wringers. When did the military get so oversensitive and touchy-feely?
The faults of the questionnaire itself have been pointed out already by my blogging buddy Adam Amel Rogers. But aside from its loaded wording (using "homosexual" interchangeably with "gay and lesbian"), blatant homophobia (suggesting that LGBT troops cannot control themselves and will run amok if allowed to be open), and bizarre expectation that its respondents can both read minds and tell the future (asking whether their superiors will have a hard time treating everyone, "even gay and lesbian" people, the same if the policy is repealed), the survey’s very existence flies in the face of everything the military is supposed to stand for. The people who wrote it — Pentagon representatives with a company called Westat, without any input from LGBT groups or, apparently, any awareness of real LGBT issues — seem never to have heard of military discipline, chain of command, or the importance of ability, skill, and focus over emotionalism and base neuroses.
Why does the Pentagon suddenly care about people's feelings? As Colonel Victor Fehrenbach, a decorated 19 year veteran who is currently being discharged after he was maliciously outed several months ago, said to Rachel Maddow last week, no one ever asked him how he felt about going into battle on Christmas Day, or getting shot at over Baghdad. More to the point, these decisions are not and should never be based on popular opinion, either in or out of the military (in the 1940s, surveys showed that both servicemen and the public favored segregating black and white soldiers, but that didn't stop President Truman and the top military brass of the time from making the right decision to integrate.)