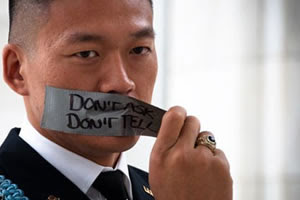 Army Lt. Dan Choi, the gay rights activist honorably discharged from the military for announcing more than a year ago on television that he's gay, says he blames President Obama for the political foot dragging on repeal of “Don't Ask, Don't Tell.”
Choi became an outspoken critic of the law that threatens gay troops with discharge if they do not remain celibate and closeted after he appeared on MSNBC's The Rachel Maddow Show to promote Knights Out, the West Point graduate group that lobbies for repeal of the policy. On the show, he announced that he's gay.
Speaking to CBS radio Friday, Choi said the policy remained in place because the president is not willing to “show solid leadership” and blamed him for not taking action.
Choi also said that his discharge letter was mistakenly mailed several weeks ago to his parents' home in California. He said he did not get notified because he's not on speaking terms with them.
“They don't accept the fact that I'm gay,” Choi said, explaining that his father, a minister with the Southern Baptist Convention, is in denial about the fact that his son is gay.
Choi fought against a May 6 discharge for “moral or professional dereliction,” which said he was being let go because he publicly announced he's gay, which constitutes gay conduct.
During the intervening months, Choi increasingly protested the Clinton-era policy, getting arrested twice for chaining himself to the White House fence in protest. Charges of failing to obey a police officer were later dropped.
On Thursday, he tweeted to his thousands of followers: “I have been discharged under DADT. Our fight is just beginning.”