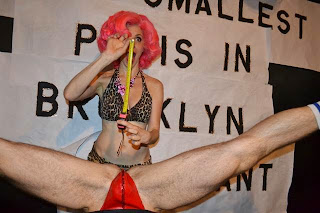 I want to try sex with a woman. I guess it’s something that’s been niggling at the back of my mind for a few years now. This feeling that, somehow, I don’t want to die not knowing what straight sex is like.

It doesn’t help that almost all of the gay guys I know have had heterosexual encounters and they just love to explain in great detail how they managed to pleasure a woman in spite of their deep-seated feelings of queasy repulsion. Lucky ladies.

Why do so many gay men say sex with a woman is repulsive to them? I just published an interview on my Youtube Channel AndyVision with Jaymi Hensley from Union J who spoke passionately about coming out and supporting the gay community. He also described himself as a ‘gold-star gay’ explaining that he’d never had any sexual encounters with a woman: “I maybe like sit there and throw up in my mouth at the thought of it.”

He wasn’t being offensive, just honest. He’s one of the most secure, confident, happy gay guys I’ve met. But personally, I’m not at all repulsed by any part of a woman’s body, nor have I ever been. True, I’m not particularly drawn to a woman’s body either but I can certainly see why it could be pretty hot to have a tumble with one. Wouldn’t it feel good to sleep with someone whose body nature designed for mine? The truth is, I have no idea. The closest I came to it was the watermelon challenge at the sports club.

I decided to ask my best mate about it. He’d dated a girl for a year at college before coming out. He paused when I put my question to him. “Andy, please tell me you’re not going to have sex with a woman.” I was a bit taken aback. He explained that I’d been going on about it for years and it was a pointless and self-destructive thing to do. “You’re gay and you’re totally happy with men. Isn’t that enough?” Firstly, I don’t get the concept of ‘enough’ and secondly, his argument was verging on biphobia and I told him so. He sighed as he tends to do when I talk to him. “Andy, you’re not bisexual. I watched you on the tube last week and I saw who you were staring at.” Who? “Pretty much all of the guys and literally none of the girls. Listen, sex with a girl can be lovely and it’s not horrible it’s just not that fulfilling.” He paused, anticipating my next question, before volunteering: “It’s kind of… looser and wet.”

Not a great sales pitch, nor can it be an accurate one. He made heterosexual sex sound like wearing a rain mac in Bangor. How many times have I heard gay guys describe sex with a woman as though it’s like putting your bits into a bowl of jelly?

I just don’t buy it. I cannot believe that inserting my penis into a vagina would be less sensory (though perhaps less sensual considering I’m gay) than putting it into a male alternative.

Besides, the descriptions my straight mates give bare little relation to the bowl of jelly scenario. Even thinking about it makes me feel a bit jiggy. I’ve been single for about five months now and, though I’ve not been a nun, I ain’t had none for a while. Surely this is the perfect time to experiment with the other half of the population before I meet the man of my dreams.

But here’s the rub. What if I had sex with a woman and loved it so much it woke something in me? I’d still be attracted to guys more than girls of course. I am not saying for one moment that gay guys can be ‘turned’. But there’s a whole side to my sexuality I’m yet to explore. Perhaps it’s a barren dustbowl with nothing but pubic tumbleweed and flaccid cacti. Then again, it might be Rio De Janeiro.

You might be wondering why, if I have this curiosity, I haven’t probed the issue before. The answer, if I’m to be absolutely honest, is that I grew up very scared of sex. Any sex, with anyone. I’d tried to sleep with girls before I came out and let’s just say my pants were not forthcoming. Then again, I was pretty hopeless with my first guy too.

Now I’m older and so much more comfortable and confident with my body and in bed. Even if I got with a woman and left her disappointed (or relieved) it wouldn’t be the end of the world. That is, as long as she knew I was gay beforehand so expectations were realistic.

I wouldn’t ever want to use a prostitute for a tonne of reasons so I’m not sure how or if it will ever happen. Could I ask a girl friend? Too risky, surely? Maybe I’ll just meet someone somehow at a party and she’ll be up for it! No, she’d have to be sober and I’d have to be very drunk…which would be unhelpful, I’m sure.

Maybe some of you can advise me? Would sex with a woman be too hard or not hard at all? And is it even worth it?