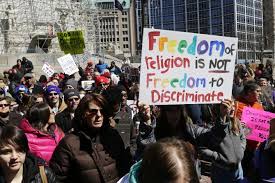 Obama's signing of amendments to the International Religious Freedom Act on Friday wasn't widely noticed — except among the community of atheists, agnostics and others who categorize themselves as "humanists."

For the first time, the law — which was originally passed in 1998 — specifies that "the freedom of thought, conscience, and religion is understood to protect theistic and non-theistic beliefs and the right not to profess or practice any religion."

Among other things, the main amendments to the law promoting religious liberty around the world:

Allow the United States to target “ ntities of particular concern" (that is, groups that aren't sovereign countries, like ISIS and Boko Haram).

Set up a way to track religious prisoners overseas.
Require that all foreign service officers undergo training in religious liberty.
President Barack Obama, first lady Michelle Obama and their daughters, Malia and Sasha, walk back to the White House after attending St. John's Episcopal Church in Washington in October 2009. AP
The addition of protections for non-theistic or even non-existent beliefs wasn't even mentioned in many news reports. But for Roy Speckhardt, executive director of the nonprofit American Humanist Association, the change is a historic cause for celebration.

"That non-theists are now recognized as a protected class is a significant step toward full acceptance and inclusion for non-religious individuals, who are still far too often stigmatized and persecuted around the world," Speckhardt said.

"Legislators are finally recognizing the human dignity of humanists and granting the non-theistic community the same protections and respect that have been given to religious communities," he said.

In its 2016 annual report (PDF), the U.S. Commission on International Religious Freedom, a federal panel that was created under the original 1998 law, highlights numerous instances of persecution of atheists and other non-believers.

The report plays no favorites, singling out important U.S. allies like Saudi Arabia, where the poet Ashraf Fayadh was sentenced to death last year for "apostasy" — specifically, for spreading atheism. The sentence was reduced in February 2016 to eight years in prison and 800 lashes.

Regulations enacted in 2014 by the Saudi Interior Ministry, in fact, classify "calling for atheist thought in any form" as terrorism.

The report also harshly criticizes Egypt, which convicted Mustafa Abdel-Nabi, an online activist, to prison in absentia in February for "blasphemy" after he published posts about atheism on his Facebook page. A year earlier, another Facebook user, Sherif Gaber, was sentenced to prison for discussing his atheist views online.

"Religious freedom for all people, theists and non-theists, is an American value we must protect," said Matthew Bulger, legislative director of the American Humanist Association.

But it's not just humanist groups that are applauding the revision.

"Protecting non-theistic beliefs and requiring increased religious freedom training for our foreign service officers emphasizes our shared value of religious liberty for all people across the globe," said J. Brent Walker, executive director of the Baptist Joint Committee for Religious Freedom, a coalition of more than a dozen Baptist denominations.

“We are pleased that religious liberty still finds broad bipartisan support," Walker, an ordained minister, said in a statement to The Baptist Standard, a publication devoted to the Baptist faith.