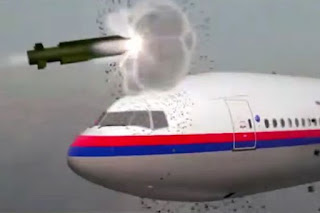 An investigation that implicated Russia in the downing of Malaysia Airlines Flight MH17 was able to track the movements of a missile launcher thanks to photos and video clips from witnesses.
Investigators revealed social media posts aided their efforts to meticulously chart the surface-to-air missile system's path - concluding it was brought into rebel-held territory in eastern Ukraine from Russia.
Prosecutors confirmed the plane with 298 people on board was shot down from the village of Pervomaysk by a Russian-made missile and the launcher was trucked back to Russia after the attack.
Reconstruction footage released by investigators contains witness photos and video that show the missile launcher traveling through the city of Donetsk and smaller towns towards the launch site.


A spokesman had claimed: "First-hand radar data identified all flying objects which could have been launched or in the air over the territory controlled by rebels at that moment.
CLICK TO PLAY
Play
0:00
/
0:00
Fullscreen
Mute
Share
"The data are clear-cut...there is no rocket. If there was a rocket, it could only have been fired from elsewhere."
Russian officials also tipped off the JIT (Joint Investigation Team) that the rural town of Zaroshchenske was a potential launch site – claiming it was controlled by Ukrainian forces at the time.
mirror.co.uk/news/world


A Dutch-led criminal investigation into the 2014 downing of Malaysia Airlines Flight 17 released Wednesday found evidence the airliner was struck by a Russian-made Buk missile that was moved into eastern Ukraine from Russia.

The report confirmed multiple findings in the past of the cause of the crash of the Boeing 777, en route from Amsterdam to Kuala Lumpur, Malaysia, killing all 298 people aboard.

Wilbert Paulissen, head of the Dutch Central Crime Investigation Department, said communications intercepts showed pro-Russian separatists separatists had called for the missile to be deployed, and reported its arrival in rebel-held parts of eastern Ukraine.

The missile which brought down Flight MH17 two years ago over eastern Ukraine was transported into the area from Russia, a Dutch-led investigation has found. Video provided by AFP Newslook

Russia, which denied responsibility for the July 17, 2014, crash from the start, continued to do so Wednesday.

Initially, Russian officials suggested a Ukrainian fighter jet flying nearby could have shot down the airliner. On Wednesday, Russian Foreign Minister Sergey Lavrov the Dutch-led investigation was “biased and politically motivated.”

The Russian military insisted Wednesday that no air defense missile systems have ever been sent from Russia to Ukraine. The Defense Ministry spokesman, Maj. Gen. Igor Konashenkov, claimed the investigation's conclusions were based on information from the internet and Ukrainian special services, the Associated Press reported.

In Washington, State Department spokesman John Kirby said the latest findings are "another step toward bringing to justice those responsible for this outrageous attack."

Eliot Higgins, founder of the open-source research group Bellingcat, whose early reports pointing at Russian involvement were verified by the Dutch report, said Russia has consistently issued false information about the crash "from claims about satellite imagery to claims about the movements of Buk missile launchers."

Russia has repeatedly denied allegations that pro-Moscow rebels in eastern Ukraine were responsible for downing the plane. Russia also has denied supporting the separatists with arms and money, despite evidence to the contrary from foreign governments and news media.

Prosecutors from the Joint Investigation Team — made up of investigators from Australia, Belgium, Malaysia, the Netherlands and Ukraine — told the relatives of those killed that they would investigate about 100 people over the incident, the BBC reported.

Robby Oehler, whose niece died in the crash, told the broadcaster: "They told us how the Buk was transported [and] how they came to that evidence from phone taps, photo, film material, video."

A separate investigation by the Dutch Safety Board concluded in October 2015 that the plane was hit by a Russian-made Buk missile.

Eduard Basurin, from the Donetsk People's Republic rebel group, told the Interfax news agency: "We never had such air defense systems, nor the people who could operate them. Therefore we could not have shot down the Boeing.”

In advance of the report's release, Russian presidential spokesman Dmitry Peskov said Russia wanted "an impartial and full investigation of that tragedy."

"No conclusions can be made without taking into consideration the latest information that was published by our military — namely the primary radar data that recorded all aircraft or objects that could be launched or be in the air on the territory controlled by militia at that time," he told reporters, according to the Tass news agency.

He added that "the data are unambiguous and there is no missile (that allegedly downed the jet) there. If there had been a missile, then it could have been launched from other territory. In this case, I do not say which territory — this is a matter of experts.”