The Supreme Court Does Not Equal Sweeping Justice For Gay Marriage

AS A young woman coming to terms with her sexuality in the 1980s, Laurette Healey began to “eliminate things” from her future. Marriage, domestic stability, the chance to form a lifelong bond with a partner; these rewards would all be available to most of her friends but they would not, she came to believe, be part of her life.
Today Ms Healey and her partner, Marcia Dávalos, live in a quiet Los Angeles neighbourhood under California’s domestic-partnership law. This means the state recognises their union and grants them most of the benefits of marriage. (Seven other states have similar arrangements.) But it does not allow them to wed.

But the passage of Prop 8 turned out to be just another step in a complex three-way jig between politicians, judges and campaigners. Gay-rights groups successfully challenged the law, first in a San Francisco district court and then on appeal. A stay was granted, meaning Prop 8 remained in force, as the case made its way through the judicial system; on March 26th it became the first gay-marriage case to reach the Supreme Court. (A second, on the Defence of Marriage Act, which denies federal benefits to married same-sex couples, was due to be heard on March 27th.)
In June 2008 the Supreme Court of California overturned a gay-marriage ban, making it the second state (Massachusetts was first) to legalise such unions. Some 18,000 couples took the opportunity to get married before Proposition 8, a constitutional amendment that banned gay marriage, won the support of 52% of the state’s voters at a referendum five months later.
Many of the 80 minutes the court devoted to Prop 8 were given over to procedural discussions of “standing”—the question of whether the proponents of the amendment had the right to argue their case in court. Californian officials have declined to defend it, so it has been left to ProtectMarriage.com, a pro-Prop 8 group, to make the case. (Similarly, Barack Obama’s administration will not advocate for DOMA; congressional Republicans will do so instead.) In 2011 California’s state Supreme Court granted standing to the Prop 8 backers. But some legal eagles have urged the Supreme Court to rule otherwise, and the justices appear receptive. 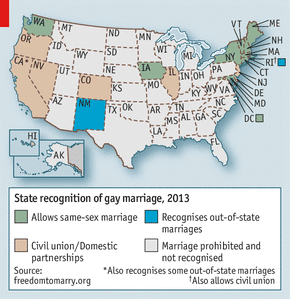 Some of the crowd who queued for five days to witness the hearing must have been disappointed by the focus on process. But to judge by their hand-wringing, when the justices issue their verdict in June it will not be a surprise if they reject the case on these grounds. (That would leave the district-court ruling overturning Prop 8 in force, although further legal challenges could follow.) Anthony Kennedy, the swing vote between the court’s liberal and conservative wings, seemed “deeply conflicted,” says Matt Coles of the American Civil Liberties Union, a lobby group. At one point the judge wondered if the court had erred in agreeing to hear the case at all.
If standing is granted, the justices then have several options. Most dramatic would be a ruling that all state bans on gay marriage contravene the equal-protection clause of the 14th amendment to the constitution. This “50-state solution” is sought by the Prop 8 plaintiffs and gay-rights groups, but it did not get much of an airing before the court.
Less sweeping would be the “nine-state solution”: to overturn bans in California and the other states (including Colorado, which recently passed a civil-union law) that recognise same-sex unions but fall short of marriage. This curious argument, proposed by the White House and presented in court by Donald Verrilli, the solicitor-general, was attacked by both wings of the court. The odds against it have lengthened.
The last option is a California-only verdict. The justices could uphold the appeals court’s ruling that to grant the right to marry only to withdraw it later is unlawful. That would overturn Prop 8 without implications for other states. Or they could uphold the will of California’s voters and leave the law in place. That would disappoint thousands of couples who hope to wed (although polls suggest that Prop 8 would soon be overturned at the ballot box anyway), but would provide solace to states that wish to preserve their bans.
Religiosity strongly predicts opposition to gay marriage: 84% of weekly churchgoers voted for Prop 8. But arguments based on faith, tradition or squeamishness cannot be adduced in court. This has forced advocates into awkward corners. It is in the state’s interest, Charles Cooper, lawyer for ProtectMarriage.com, told the Supreme Court, to keep marriage heterosexual in order to regulate procreation. “Nobody thinks that’s what marriage is about,” says Michael Klarman of Harvard Law School, “but that’s the argument they must make.” 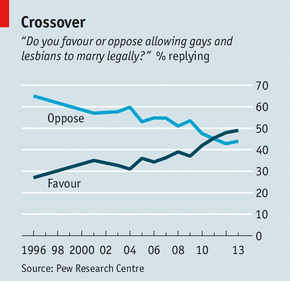 What if the court were to rule expansively? Gay-marriage opponents warn of anotherRoe v Wade that cuts off debate and poisons politics for decades. Their foes citeLoving v Virginia, the 1967 case that overturned bans on interracial marriage without triggering much resentment. That seems the better comparison, and not only because it concerns marriage. Nearly half of Americans oppose gay marriage but more back it, and their numbers are growing quickly (see chart). Fully 64% think gay marriage is inevitable.
If not rights, then votes
It is not hard to see why: support among almost every demographic group is growing, and youngsters are the most liberal of all. Sniffing the political wind, last month many Republicans called on the justices to ditch Prop 8. Hillary Clinton has added her support. In the 2004 election cycle Republicans used gay marriage to whack Democrats; the reverse could happen in 2016.
The change in public opinion found political expression four times over last November. After a string of losses for campaigners Maine, Maryland and Washington became the first states to legalise gay marriage via the ballot box, and voters in Minnesota rejected a proposed ban. Legislatures in six other states and Washington, DC, have approved gay marriage. Several others, including Illinois and Minnesota, are debating bills; some could pass before the court’s ruling.
Both sides of the debate have found uses for this turnaround in fortunes. Six months ago defenders of “traditional marriage” were crowing about their electoral invincibility; they now say America is conducting a vigorous democratic debate that judges should allow to run its course. This argument may appeal to cautious justices.
As for gay-marriage campaigners, their successes have helped repair a split that emerged when the Prop 8 case was filed in 2009. Backers argued that marriage was a civil right that should not be held hostage to electoral whims. Others, fearing backlash from a premature court ruling, preferred a quieter approach, including state-by-state political campaigns.
The political track now looks more viable, but the growth in support that made election wins possible has also reduced fears of backlash. “The momentum on the ground makes people less concerned about whether we are before the court before we should be,” says Brian Moulton, legal director at the Human Rights Campaign, a lobby group. The cause has been helped by ever-louder support from Mr Obama, who appears to see gay marriage as the great civil-rights struggle of the era.
If so, it is being waged for couples like Ms Healey and Ms Dávalos. They plan to marry if Prop 8 is scrapped, but without fanfare. “Marriage is much more serious than a ‘yippee-for-me’ day,” says Ms Healey. The importance of marriage, she adds, is the only thing her opponents get rights.
economist.com