by Ray Martin in Latest Findings, Life to Get More Information or Join the Panel for Cash or prizes

Some say that certain accents are preferred over others based on how they sound to the ear; however, a preference for some accents often arises from positive associations that we have formed from our experiences.  We associate accents with favorite celebrities, friends and family, or characters on TV.

In a recent Omnibus Survey, the respondents were asked about which accents they associated with various attributes such as:  Fun, trouble, education, money, beauty, countryside, and impatience. 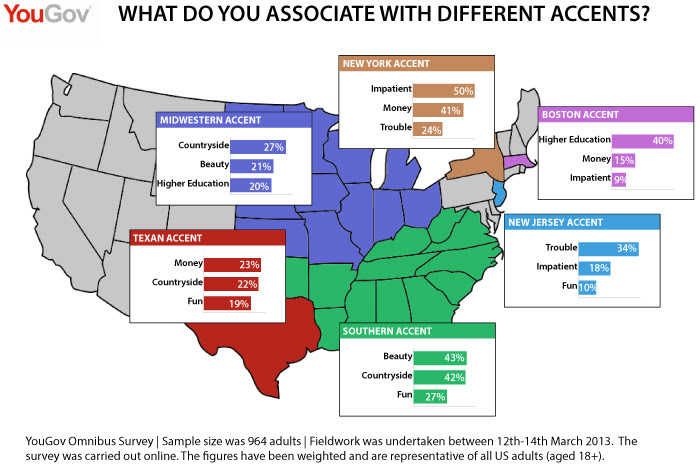 Respondents associated New York accents with impatience, money, and trouble – attributes that clearly resonated with local North Easterners who most keenly agreed with them.    Southern accents invoked strong associations with beauty and the countryside.   The New Jersey accent, after years of The Sopranos and Jersey Shore, is mostly associated with trouble.  A Boston accent, however, means education.
Beauty is in the eye of the beholder, or the ear of the hearer.  While half of the over 55s associated the South with beauty, only 32% of 18-34 year olds agreed.  Men and women also had divergent views.  While both strongly associated Southern accents with beauty (43% of adults), women also associated New York accents with beauty (women 23%, men 12%), whereas men conjured up beautiful Mid-Westerners (men 25%, women 17%)
With foreign accents, British and Chinese accents were both most highly associated with education and money Caribbean accents were found to be associated with fun and Italian accents were primarily associated with beauty.  Finally to the American ear an Irish accent conjures up images of the green countryside and good fun.
For further information about poll results, and for details about methodology and Omnibus services,  To Get More Information or Join the Panel for cash and prices
Over 5Million Reads Adam Gonzalez at March 30, 2013