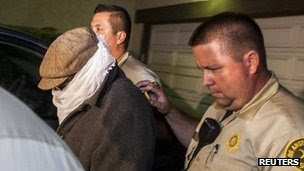 Continue reading the main story
A man suspected of involvement in the making of an anti-Islamic film that has sparked violent protests across the Middle East and north Africa is being questioned by US probation officers.
Nakoula Basseley Nakoula was convicted of bank fraud in 2010 and later released on condition that he did not access the internet or use aliases.
He has denied involvement in the film, clips of which have been posted online.
At least seven people died in protests over the film on Friday.
The Egyptian Prime Minster, Hisham Qandil, has called on the US to ensure no further insults to Prophet Muhammad.
The US, he said, should "take the necessary measures to ensure insulting millions of people and their beliefs does not happen".
"It is unacceptable to insult our prophet and it's also unjustifiable to have a peaceful demonstration turned violent," he said in an interview with BBC Arabic.
On Tuesday, the US ambassador to Libya and three other Americans were killed after the US consulate was stormed in the city of Benghazi.
Anger over the inflammatory film was cited as a spark for the attack, but there is suspicion that it was pre-planned.
The US victims were repatriated on Friday in a ceremony at Andrews Air Force Base attended by US President Obama and Secretary of State Hillary Clinton.
It is unclear who is behind the film - Innocence of Muslims - which has been widely circulated on the internet in English and Arabic.
Any portrayal of the Prophet Muhammad is considered blasphemous, and the film depicts him as a foolish, power-hungry man.
The character is also seen having sex with his wife and other women. In one scene he is seen sanctioning the sexual abuse of children, in another he says he is gay.
The original posting of a 14-minute trailer for the film on Youtube came from an account linked to the name 'sambacile'.
No film-maker by the name of Sam Bacile has been traced, and the US authorities suspect Nakoula Basseley Nakoula of using the pseudonym.
Nakoula served 21 months in prison for using stolen identities to open numerous bank accounts that he later used to withdraw funds.
He was released in June 2011 with the proviso that he did not access the internet or use any aliases without permission.
Nakoula, who was also convicted of drugs offences in 1997, volunteered for questioning and was escorted from his home by officials early on Saturday, according to a spokesman for the Los Angeles County Sheriff's Department.
He wore a scarf, hat and sunglasses to hide his identity as he left his home in the suburb of Cerritos.
Local media reported that a man later emerged from the police station wearing the same outfit.
Peace call
Anger over the film erupted on Tuesday when, as well as the attack in Benghazi, the US consulate in Cairo was attacked.
There has since been violent unrest in Yemen, Sudan and Tunisia, with further protests in Somalia, Iraq, Iran, Pakistan and Turkey.
An attack on a Nato base in Afghanistan on Saturday that killed two US marines was also carried out in response to the video, the Taliban have said.
The US has stepped up security at its embassies across the region, and the EU has urged leaders in Arab and Muslim countries to call for peace.