A Britton Disappear From A Gay Cruise Aboard A Ship

A British tourist is missing after falling more than 100ft overboard from the world’s biggest cruise ship off the coast of Mexico.
The Mexican navy and coastguard are still searching for the unnamed man, who is aged 30, but there is  little hope he will be found alive.
He was among more than 4,500 passengers on board Allure of the Seas as it sailed from Florida to an island south of Cancun on a gay and lesbian-themed seven-day cruise. 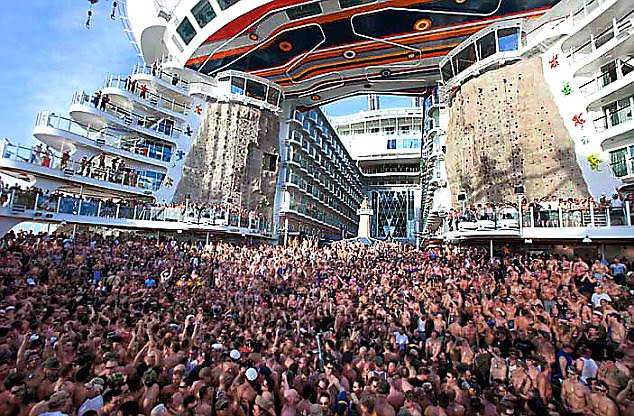 'Hedonistic': Allure of the Seas was used to host a massive party with 4,500 passengers on board as the ship sailed from Florida to an island south of Cancun on a gay and lesbian-themed seven-day cruise
CCTV captured him falling from a balcony outside his cabin on Deck 11 at about 7.10am local time on Friday when guests were sleeping after an ‘Eighties’ party.
Most of those on board the ship, chartered by a firm called Atlantis, are gay men said to be enjoying the ‘hedonistic atmosphere’.
A picture, above, posted online from a recent Atlantis cruise shows the decks of the 213ft-tall vessel packed with bare-chested revellers.
Sean Patrick Lewis, a passenger on the current cruise, said the tragedy has done little to dampen the mood on board: ‘We have been having parties every night on the ship with lights, lasers and very loud music.’ 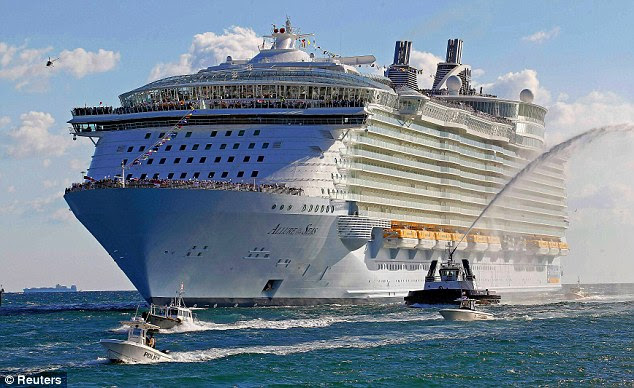 Royal Caribbean's 'Allure of the Seas' cruise ship. CCTV captured the man falling from a balcony outside his cabin on Deck 11 at about 7.10am local time on Friday
The ship’s owner, Royal Caribbean International, insists that the CCTV footage shows the man jumped deliberately.
But the family of 24-year-old cruise ship worker Rebecca Coriam, who disappeared from the Disney Wonder off the coast of Mexico last year, believe it is too early to make this judgment.
They were also told their daughter had jumped, but a year on they say they are no closer to discovering the truth about what happened.
Rebecca’s mother Ann Coriam said: ‘They can’t possibly have carried out the thorough investigation necessary to come to that conclusion.’
Campaigners complain that there is no international police organisation for crimes at sea, leaving investigations to the police force of the country where the ship is registered – often places such as Panama, Bermuda or, in the case of Allure of the Seas, the Bahamas.
A Royal Caribbean executive, who asked not to be named, told The Mail on Sunday: ‘The ship is on full charter to Atlantis, meaning they essentially bought the ship’s cabins for the cruise and then sold them. Atlantis likes to throw big parties in the public spaces.’