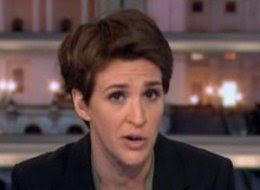 Rachel Maddow criticized CNN for airing Michele Bachmann's Tea Party-themed response to the State of the Union, calling it "inexplicable"
CNN was the only network to air both the official Republican response, given by Wisconsin congressman Paul Ryan, and Bachmann's speech. Speaking on Tuesday night, after the response had aired, Maddow said she was at a loss to explain CNN's choice.
"Michele Bachmann is not the national spokesperson for the Republican Party," she said. "She is unlikely anytime soon to be chosen to be the spokesperson for her party. But tonight, inexplicably, a national news network decided that they would give Michele Bachmann a job that her own party never did."
Maddow called it "a remarkable act of journalistic intervention to elevate, in effect, a group with which they are co-sponsoring a presidential debate...to the level of the major parties in this country."
CNN, Maddow said, "decided tonight not to just cover the news about the State of the Union, they decided to make their own."
The Huffington Post  Jack Mirkinson
Over 5.6 Million Reads Adam Gonzalez at January 27, 2011

i’m convinced that people like Bachmann don’t know what they believe in; they’re simply trying to capitalise on conservatives’ righteous indignation after the 2008 election.

i don’t remember who said it first, but it’s a case of being sore losers, as opposed to having a legitimate grievance pertaining to any one issue. As i’ve said many times in the past, conservative Republicans are chagrined because they had such high hopes for Bush, and when he couldn’t deliver, the inevitable consequence was Obama, and the Democrats’ takeover of Congress. That’s what happens in a two-party system. Love him or despise him, Obama’s election in 2008 was far more an eventuality than it was a victory. The GOP ran McCain–and especially Palin–as a crapshoot; they knew it was doubtful they would win, but they wanted to see what would happen. Today’s teabaggers, and pols like Michelle Bachmann, are merely manifestations of conservative hand-wringing; recalcitrant children whining about their decline in power. However, just as entertainers (take Marilyn Manson, for example) are blamed for the sometimes overzealousness of their fans, the outlandish rhetoric and apocalyptic tone employed by people like Bachmann, and does make an impression upon those with compromised intellects. Consider the so-called ‘Hutaree’: it’s impossible for any rationally thinking person to take a group like this seriously, and my guess is even the FBI didn’t seriously give shrift to the notion that they posed any legitimate threat to the government, however, if a few far-right nutjobs decided they could catalyse a revolution by gunning down government employees or blowing up a post office, that’s more than enough reason to intervene. Bachman, Palin, Beck, etc. should consider the volatility of their audiences’ mental health, and avoid feeding the animals.