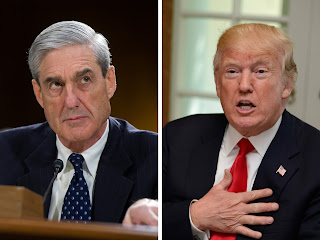 Over the weekend, President Trump made his most direct — and explicit — criticism of special counsel Robert Mueller’s Russia investigation with this tweet: “The Mueller probe should never have been started in that there was no collusion and there was no crime. It was based on fraudulent activities and a Fake Dossier paid for by Crooked Hillary and the DNC, and improperly used in FISA COURT for surveillance of my campaign. WITCH HUNT!”

Yet that one tweet contained at least five inaccuracies or distortions.

The probe started after Trump fired FBI Director James Comey, who had testified before Congress two months earlier that his agency had been investigating allegations that Trump's 2016 campaign might have contacts with Russian entities. Mueller was appointed as special counsel by the No. 2 official in Trump’s Justice Department, Rod Rosenstein.

Although Trump says there was “no collusion,” that’s not exactly what Republicans on the House Intelligence Committee concluded. “What we said … is that we found no evidence of it,” Rep. Michael Conaway said on “Meet the Press” yesterday, explaining that saying “no evidence of collusion” is different than saying there was “no collusion.” Conaway also admitted that Democrats on the committee have a different opinion on collision. “The collusion issue, we found no evidence of it. The Democrats think they have. They've not shared that with us,” he said.

While Trump said that the Russian investigation was based on “a fake dossier,” both Democrats and Republicans have admitted the original inquiry began with George Papadopoulos’ conversation with an Australian diplomat that Russia had dirt on Hillary Clinton. “The Papadopoulos information triggered the opening of an FBI counterintelligence investigation in late July 2016 by FBI agent Peter Strzok,” February’s memo by Rep. Devin Nunes’ staff said.

And although Trump says the FISA wiretap of former Trump adviser Carter Page was surveillance of his campaign, the FISA court order to begin surveillance on Page took place after Page LEFT THE CAMPAIGN, the Washington Post writes.

By the way, here’s a reminder of the known and reported contacts that Team Trump had with Russians, their supposed emissaries and WikiLeaks during the 2016 campaign:

The June 9, 2016, Trump Tower meeting: After publicist Rob Goldstone emailed Donald Trump Jr. said that the Russian government has dirt on Hillary Clinton ( Trump Jr. responds, "Thanks, Rob I appreciate that. I am on the road at the moment but perhaps I just speak to Emin first. Seems we have some time and if it's what you say I love it especially later in the summer." Trump Jr., Jared Kushner, and Paul Manafort eventually meet with Kremlin-connected lawyer Natalia Veselnitskaya on June 9, 2016.

Roger Stone’s reported contacts with WikiLeaks’ Julian Assange: Last week, the Washington Post wrote about how Roger Stone, an informal political adviser to Trump, had claimed contact with Julian Assange in 2016, according to two associates. Stone later said he was joking when he made a reference to Assange.

SOME REPUBLICANS HAVE CRITICIZED TRUMP’S ATTACKS ON MUELLER. OTHERS HAVE STAYED SILENT

The New York Times: “[Trump’s attack on Mr. Mueller, a longtime Republican and former F.B.I. director appointed by a Republican president, George W. Bush, drew immediate rebukes from some members of the party who expressed concern that it might presage an effort to fire the special counsel. Such a move, they warned, would give the appearance of a corrupt attempt to short-circuit the investigation and set off a bipartisan backlash. ‘If he tried to do that, that would be the beginning of the end of his presidency, because we’re a rule-of-law nation,’ Senator Lindsey Graham of South Carolina, an ally of the president, said on ‘State of the Union’ on CNN.”

“Senator Jeff Flake of Arizona, a sharp critic of Mr. Trump, [added]: ‘People see that as a massive red line that can’t be crossed,’ he said. He urged Mr. Trump’s advisers to prevail on him not to fire Mr. Mueller. ‘We have confidence in Mueller.’ Representative Trey Gowdy, Republican of South Carolina, said if the president was innocent, he should ‘act like it’ and leave Mr. Mueller alone, warning of dire repercussions if the president tried to fire the special counsel.”

“The House speaker, Paul D. Ryan, Republican of Wisconsin, issued a statement likewise warning Mr. Trump to back off. “As the speaker has always said, Mr. Mueller and his team should be able to do their job,” said AshLee Strong, a spokeswoman. His counterpart, Senator Mitch McConnell of Kentucky, had no comment, as did a number of other top Senate Republicans.”

NBC/WSJ POLL: DEMOCRATS HOLD A DOUBLE-DIGIT LEAD FOR THE 2018 MIDTERMS, EVEN AS TRUMP’S JOB RATING TICKS UP

As one of us wrote over the weekend, “Democrats enjoy a 10-point advantage over Republicans in congressional preference for the 2018 midterm elections, even as President Donald Trump's job approval rating has ticked up, the latest national NBC News/Wall Street Journal poll finds. Fifty percent of registered voters say they prefer a Democratic-controlled Congress, while 40 percent want a GOP-controlled one.”

“That double-digit lead — typically a sign of strong Democratic performance for the upcoming election — is up from the party's 6-point edge in January's NBC/WSJ poll, which was 49 percent to 43 percent, though the change is within the poll's margin of error.”

“Meanwhile, the NBC/WSJ polls finds that Trump's approval rating stands at 43 percent among all Americans — up four points from January. Fifty-three percent of adults say they disapprove of the president’s job, down from 57 percent two months ago. The improvement for Trump comes from Republican respondents (who went from 78 percent approve in January to 84 percent this month), white men (52 percent to 59 percent) and independents (33 percent to 45 percent).”

FBI, PLANNED PARENTHOOD, AND MUELLER ARE THE MOST POPULAR POLITICAL FIGURES/INSTITUTIONS IN THE NBC/WSJ POLL Email ThisBlogThis!Share to TwitterShare to FacebookShare to Pinterest
Labels: Trump-Lier