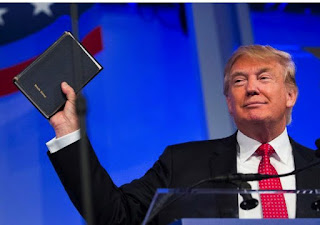 US President Donald Trump's plan to deter school shootings does not include his repeated calls to raise the age for buying semi-automatic rifles to 21.
But he is moving ahead with his controversial proposal to provide firearms training to school employees.
The president tweeted that there was not much political support for raising the minimum age for buying firearms.
Americans must be 18 to buy a rifle or shotgun and 21 to buy a handgun off licensed dealers under federal law.
Unlicensed sales, such as those at gun shows, are federally allowed at any age for rifles and shotguns, and 18 for handguns.
The White House unveiled its proposals on Sunday night, almost a month after a high school shooting left 17 dead in Parkland, Florida.
The 19-year-old suspect, a former pupil, allegedly used an AR-15 semi-automatic rifle to attack Marjory Stoneman Douglas High School on 14 February.
The White House said a new federal commission on school safety would examine the age limit issue.
But Mr Trump tweeted on Monday: "On 18 to 21 Age Limits, watching court cases and rulings before acting. States are making this decision. Things are moving rapidly on this, but not much political support (to put it mildly)."

How does the plan differ from Mr. Trump's proposal?

White House officials described the plan revealed on Sunday as a fulfillment of the president's call for action after Parkland.
As well as setting up the new committee, it proposes to:
Speaking last month, President Trump had appeared indignant at the fact Americans could legally buy assault rifles from the age of 18 yet had to wait until 21 to buy handguns.
"I mean, so they buy a revolver - a handgun - they buy at the age of 21," he told school officials.
"And yet, these other weapons that we talk about... They're allowed to buy them at 18. So how does that make sense? We're going to work on getting the age up to 21 instead of 18."

He has reportedly come under pressure from the country's main gun lobby, the National Rifle Association (NRA), not to change existing legislation.
The NRA is suing Florida after it passed a state gun control law which raises the legal age for buying rifles to 21 as well as allowing for the training and arming of school staff.
According to the NRA, the bill signed off by Governor Rick Scott, a staunch ally of the gun lobby who like Mr Trump is Republican, violates the US constitution.

What do Mr Trump's critics say?

Chuck Schumer, leader of the opposition Democrats in the Senate, went on Twitter to dismiss the action plan as "baby steps".
End of Twitter post by @SenSchumer
Avery Gardiner, co-president of the Brady Campaign to Prevent Gun Violence, said: "Americans expecting real leadership to prevent gun violence will be disappointed and troubled by President Trump's dangerous retreat from his promise."


Survivors of the Florida shooting have been pressing for a complete ban on sales of assault-style rifles to the public.