The guy with no heart that made sick people go without because he could.  He got sentenced to 7 years. 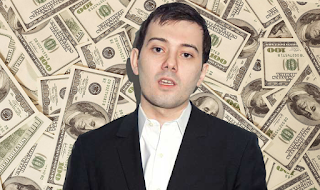 [Forbes] What a comedown. Two years ago, the smirking failed hedge fund manager and former pharma CEO Martin Shkreli laughed as he invoked his Fifth Amendment rights when testifying before Congress. It was all a joke
Today, his smirk was gone. Shkreli cried — sobbed, in some accounts — as he begged for "your honor's mercy," pleading for leniency from a federal court judge.
Shkreli got seven years on Friday. Mercy he had failed to show others was withheld. "Pharma Bro" had committed an unforgivable theft.
The 34-year-old son of Albanian and Croatian immigrantshas had an interesting career. He was first investigated by the SEC in 2000, when he was 16, for suspiciously timely shorting of a stock. Shkreli was cleared.

In New York,  Martin Shkreli, the notorious former hedge fund manager, is scheduled to be sentenced in U.S. District Court on Friday for defrauding investors.

Prosecutors have asked U.S. District Judge Kiyo Matsumoto to sentence Shkreli to at least 15 years in prison. Shkreli’s defense team is asking for much less, 12 to 18 months.

Shkreli’s case has attracted international media attention for his outsized personality. An hour before his sentencing hearing, more than half a dozen television cameras were stationed outside the courthouse. Inside, his father, who sat in the front row of the courtroom every day during his five-week trial, paced in a hallway.

Shkreli, 34, best known for raising the price of an AIDS drug by 5,000 percent when he was chief executive of Turing Pharmaceuticals, was convicted by a Brooklyn jury in August of defrauding the investors in his hedge funds. Shkreli lied to obtain investors’ money, they didn’t tell them when he made a bad stock bet that led to massive losses, prosecutors argued. Instead, they said, he raised more money to pay off other investors or took money and stock from Retrophin, a drug company that he was running.

Shkreli’s defense attorneys have argued that his investors eventually made money and said the jury erred by convicting Shkreli on some of the counts he faced. Matsumoto rejected those motions.

“The big risk that Shkreli faces here is that he has kind of dug his own grave four times already with this court by showing this complete disdain and thumbing of his nose to the judicial process and the court and law enforcement,” said David Chase, a former prosecutor for the Securities and Exchange Commission. “You couple that with the judge’s very powerful discretion, and it just [isn’t] going to end well.”

Shkreli responds to conviction
Martin Shkreli, a former pharmaceutical CEO, spoke to reporters after he was convicted of three counts of securities fraud on Aug. 4. (Reuters)
Usually boisterous and defiant, Shkreli has recently struck a contrite tone. “I accept the fact that I made serious mistakes, but I still believe that I am a good person with much potential,” he said in a three-page letter to the judge overseeing his case.

But it may be too late. Prosecutors dismiss Shkreli’s contrition as insincere and say that his ability to repay investors is further evidence of his crime, not his innocence. “Not once does Shkreli acknowledge that he lied to investors and committed fraud,” prosecutors said. Shkreli’s investors were not “repaid due to Shkreli’s personal generosity or honest hard work, but were ultimately remunerated due to Shkreli’s continuing crimes.”

In the two years since FBI agents ushered him from his Manhattan apartment, Shkreli has gone from a rising star in the hedge fund world to Wall Street bad boy. He has smirked his way through interviews and congressional appearances and beefed with rappers, reporters and almost anyone else in his path. He was repeatedly kicked off Twitter. There was a satirical musical about him, “Pharma Bro: An American Douchical!” (it received good reviews) and an episode of CNBC’s “American Greed” dedicated to his troubles.

His antics even continued during his five-week trial. Once, he walked into a room full of reporters and mocked the Brooklyn prosecutors on his case as the “junior varsity” to the federal prosecutors in Manhattan. Matsumoto told him to stop talking. Later, after the trial, Matsumoto revoked Shkreli’s $5 million bail after he offered his Facebook followers money to pull a strand of Hillary Clinton’s hair.