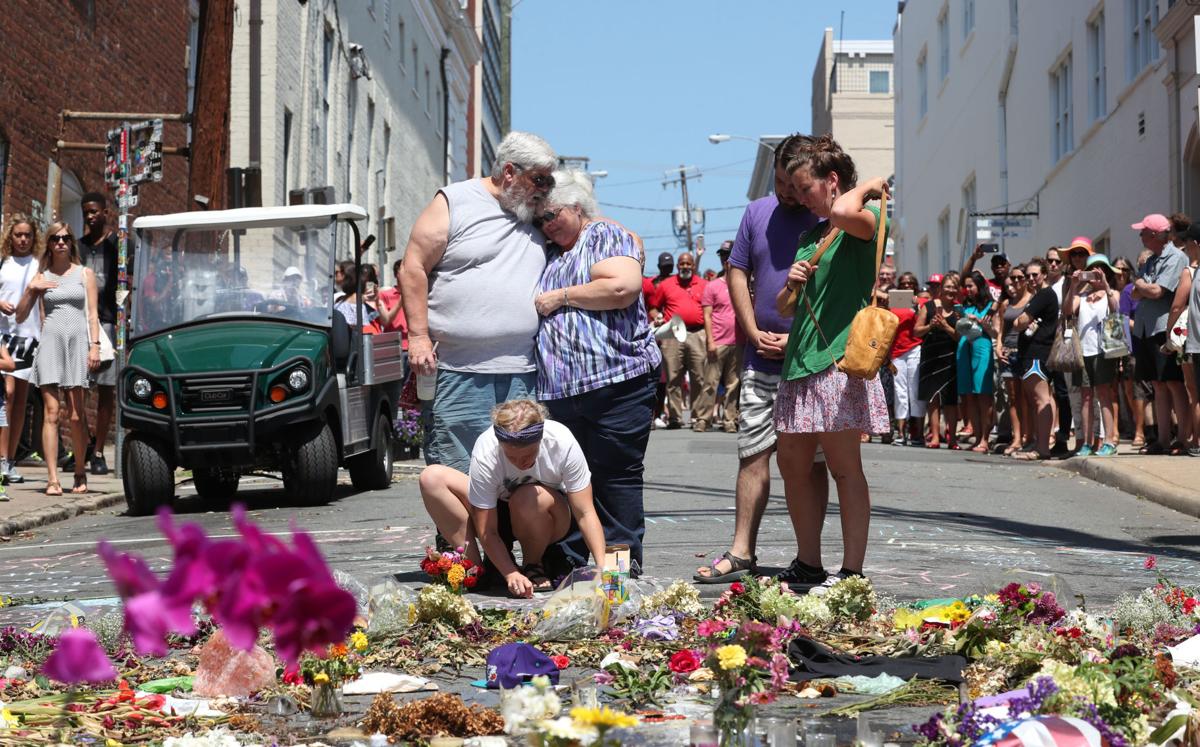 Surrounded by supporters, Kim and Susan Bro, left, became emotional on Saturday as he visited the site where Heather Heyer died exactly one week ago after a car plowed through a group of people on 4th Street SE. This was the couple’s first visit to the site. Photo/Andrew Shurtleff/The Daily Progress

“My hope is that people who see this or attend this know that the city and the people of Charlottesville will not be victim to hate again and we will not accept people that come in and bring their hatred into a city of love and diversity and art and music,” Kelsey Ripa, one of the organizers of the event.
Alex Benshoff, another organizer of the event, said he hopes they can help people feel like it’s like any other day in Charlottesville with the peace gathering while still respecting the victims of last week’s events.
“It should be just a normal day getting out there, showing the world while we're still in the world's eye that this is what Charlottesville is all about,” Benshoff said. “It's all about people getting together on the Downtown Mall, local business, music, and poetry and art and culture, you know?”
Priscilla and Chris Sonne, Nelson County residents, came out to the peace gathering because they wanted to show others that hanging out on the Downtown Mall and enjoying the company of others is closer to what defines the area than what happened Aug. 12.
“We felt like coming to this as just sort of a step toward saying, ‘Hey, this is more of who we are,’” Chris Sonne said. “This is a loving community and accepting community and we just wanted to be part of that as part of our own healing process for having seen what happened last weekend.”
City police quickly arrested the driver of the car, 20-year-old James Alex Fields, Jr., of Maumee, Ohio. He has been charged with second-degree murder in Heyer’s death and faces five counts of malicious wounding, three counts of aggravated malicious wounding and one count of hit-and-run.

Later that day, two Virginia State Police officers who had assisted in the law enforcement response died in a helicopter crash in Albemarle County. Jay Cullen of Midlothian and Berke Bates of Quinton died at the scene. This brought the death toll to three people on that day in which the people full of hate towards equality and love for their whiteness thought they were in another country and felt free to put back the hood or just come out on their polo shirts and kick and beat anybody on the opposite side of the fence...  [adamfoxie]

Michael Bragg is a reporter for The Daily Progress. Contact him at (434) 978-7265, mbragg@dailyprogress.com or @braggmichaelc on Twitter.
Over 5.6 Million Reads Adam Gonzalez at August 22, 2017