NJ with Lowest Opioid Prescription Rates Is Made to be by Christie as the Worse-Why? 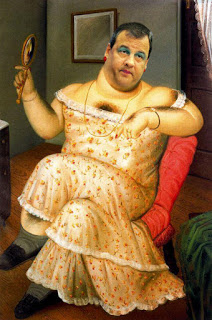 New Jersey last year reported one the lowest opioid prescription rates in the nation, even before Gov. Chris Christie signed into law tough new restrictions limiting when doctors may prescribe potentially addictive pain killers, according to a new survey.
In New Jersey, prescriptions declined from 5.16 million to 4.59 million, a decline of 11 percent, according to a report released by the American Medical Association.
That amounts to 0.5 prescriptions per capita, second-lowest behind California and Hawaii at 0.4 scripts. New Jersey is tied with Alaska, Massachusetts, Minnesota and New York, according to the report released Friday.
In its report, "Physicians' progress to reverse nation's opioid epidemic," the leading lobby for doctors said prescribing rates have declined in all 50 states. During the same period of time, physician use of state prescription drug monitoring programs and the number of physicians undertaking training programs on opioid prescribing, pain management, addiction have spiked dramatically.
Opioids over-prescribed in South, but not much in N.J.
"These are good signs of progress, but to truly reverse the nation's opioid epidemic, we all have much more work to do," said Patrice A. Harris, who chairs the AMA's Board of Trustees.
Despite its dense population and ample access to physicians, New Jersey has ranked low in opioid prescription rates for some time. In 2012, the U.S. Centers for Disease Control and Prevention found 63 prescriptions were written for every 100 people New Jersey, at the bottom with New York, Minnesota, California and Hawaii in the lowest group.
Alabama and Tennessee were the highest-prescribing states, recording 143 prescriptions per capita, the CDC found in 2012.
Last year, the CDC set guidelines for prescribers which state a seven-day supply is typically all that is required. In February in a show of determination to combat an epidemic of overdoses, Gov. Chris Christie and the Legislature adopted a law setting a five-day initial prescription that a doctor could increase after four days if pain has not subsided.
The Medical Society of New Jersey, the state affiliate for the American Medical Association, opposed the bill and predicted  cautious doctors would be reluctant to recommend opioids when they are necessary.
Mishael Azam, chief operating officer for the Medical Society, said that prediction has come true, based on conversations with its members.
"Since the CDC guidelines were released and (S3) was signed, patients feel like criminals for needing pain medication," Azam said.
"Patients who need medication for mobility or daily quality of life are losing access because physicians are being blamed for opioid addiction, thus reducing even legitimate prescribing," Azam said. "Physicians are in fact learning and changing behavior, doing their best to balance the goals of treating patients and reducing addiction."
Christie has made reducing the addiction and overdose rate of heroin and prescription drugs the centerpiece of his final year in office.
Backed by CDC studies and statistics that have shown a corresponding rise in the number of opioid prescriptions and fatal overdoses, Christie has taken aim at prescribing practices in the state and expanded the requirements that pharmacists update and doctors consult the statewide prescription monitoring database.
The law says doctors treating patients for acute pain must limit the length of the initial prescription to no more than five days. The law allows physicians to add another five days to the prescription after the fourth day if the pain has not subsided.
The measure would not apply to hospice or cancer patients or people in long-term care facilities, according to the bill. Nor would it apply to patients who are being treated for chronic pain.
By Susan K. Livio | NJ Advance Media for NJ.com
Susan K. Livio may be reached at slivio@njadvancemedia.com. Follow her on Twitter @SusanKLivio. Find NJ.com Politics on Facebook.