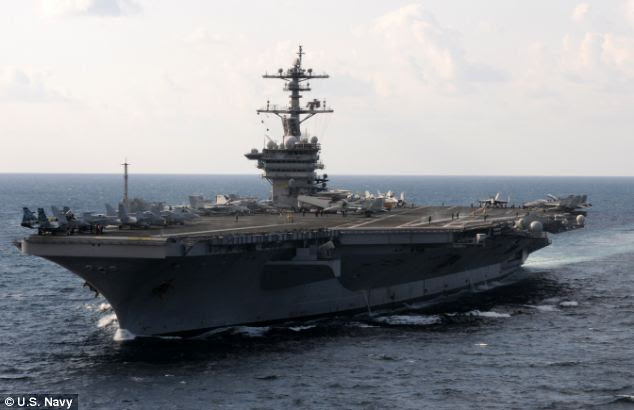 Osama Bin Laden’s last rites aboard the USS Carl Vinson were shrouded in such secrecy that the ship’s crewmen had little idea what was going on as the slain Al-Qaida leader’s body was helicoptered in and swiftly buried at sea, new US military emails have revealed.
Commanders were careful to keep the operation under wraps, using code-words to refer to the body as it was airlifted from the Bin Laden compound in Abbotabad, Pakistan, after the 1 May raid by US Navy Seals. “Any news on the package for us?” Rear Admiral Charles Gaouette, deputy commander of the US Navy’s fifth fleet, asked Samuel Perez, the Rear Admiral in charge of the strike group that included the Vinson, to check whether the corpse had arrived.
“Fedex delivered the package,” Perez answered, according to the emails obtained by the Associated Press under a freedom of information request. “Both trucks are safely enroute home base.”
The documents reveal that only a small group of Navy bosses was kept in the loop as Bin Laden’s last rites were conducted in accordance with Islamic norms. In one message stamped secret, Gaouette informs the top brass about the procedures observed.
“Traditional procedures for Islamic burial was followed,” he says in the 2 May email, addressed to the likes of the then chairman of the US Joint Chiefs of Staff, Adm. Mike Mullen, and James Mattis, the general in charge of US Central Command. “The deceased’s body was washed (ablution) then placed in a white sheet. The body was placed in a weighted bag. A military officer read prepared religious remarks, which were translated into Arabic by a native speaker. After the words were complete, the body was placed on a prepared flat board, tipped up, whereupon the deceased’s body slid into the sea.”
Highlighting the secrecy observed thorough the operation, which led to Bin Laden being killed by a Navy Seal,  Rear Adm. Gaouette added: “The paucity of documentary evidence in our possession is a reflection of the emphasis placed on operational security during the execution of this phase of the operation.”
The emails released by the Defense Department late on Wednesday were heavily blacked out, according to the AP.
They constitute the first public disclosure of the details of the burial, which another message in the disclosed cache, written by the Vinson’s public affairs officer, confirms were only shared with a small group of the ship’s top officers.
Earlier this year, the Defense Department, responding to separate AP requests for details, said it could’t find any photos or videos taken during the raid. Nor, it said, were there any showing Bin Laden’s remains, claims that appear to chime with Rear Adm. Gaouette’s message to military chiefs. The Pentagon, meanwhile, said it could’t find a death certificate or DNA results identifying the terror chief’s body.
The information vacuum has mostly been filled by unofficial accounts, including disclosures by Mark Bissonnette, a former soldier who was among the American officer’s raiding the compound that night, and who recent published a first-person account called “No East Day”. Writing under the pseudonym Mark Ownen, the ex-Seal, claimed Bin Laden was unarmed and already dead or dying when soldier’s burst into his room.
The Pentagon did not authorize his account, while Mr Owen has said he did not disclose any secrets in the book.
NIKHIL KUMAR

Email ThisBlogThis!Share to TwitterShare to FacebookShare to Pinterest
Labels: Terrorist