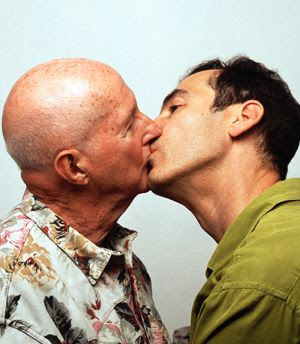 Hidalgo photograph censored by FaceBook
"The images should not refer to political, sexual or other sensitive matters" reads the Facebook Code of Ethics. The photo that announced the project laONG Visible Madrid Cultural Association, seeks gay art house did not comply with this rule. The page, which called for economic cooperation to move forward with a documentary has been removed for violating "the rules of Facebook advertising," the e-mail sent to you Pablo Peinado, creator of the NGO. "For them a kiss between two men is a sensitive issue," laments Peinado.The organizer explained that the photo was taken by the contemporary Spanish artist Juan Hidalgo, an art photographer who has many works in museums and collections around the world. This also used the picture to your wedding invitation and then donated it to the Visible project."I wanted to do a little advertising campaign documentary that took eight years preparing for and received that email. Also, I refer to a code of ethics page straight out of prehistory, "said Peinado.The documentary, shot in Madrid, brings together a thousand works of gay and lesbian donated by over four hundred artists from thirty countries. Hairstyle just wanted to give one more push to get micro-patrons, and that his film is funded through crowdfunding.Aunque part of the documentary is funded by the Spanish Agency for International Development, "this does not cover the entire budget as need at least 3,500 euros extra to pay for other items "as read on the project website."We believe it is important to shoot this documentary to present a unique art collection in the world," communicates Peinado. Through this documentary aims to build a discourse of rights and the fight against homophobia, through culture and identity of the gay community. However, the ultimate goal of this documentary is to find a place to exhibit the work that the association is subsumed under the collective name Visible and turn it into a museum of gay culture.From Facebook have said they will study the case and added that sometimes pages are removed for technical reasons and not for content.In July 2010, something similar happened. Facebook removed a photograph of Robert Mapplethorpe, one of the most celebrated artists of all time, author of the best images of Susan Sarandon, Blondie, Andy Warhol and Patti Smith, as too "explicit". It was the cover of the latest Scissor Sisters album which saw the back of a man holding it with his hands.