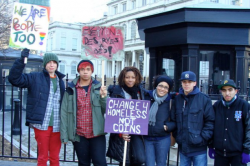 New York Gov. Andrew Cuomo has only been in office a few months, but he seems poised to do the unthinkable: tell thousands of homeless kids in the state that they deserve to be thrown out on the streets, so that the governor can givetax breaks to millionaires.
Gov. Cuomo will approve a budget this week that at this moment includes drastic cuts for homeless youth services -- cuts that will slash funding to state homeless shelters by more than half, and force thousands of kids out of shelter beds and onto the streets of New York.
That includes lesbian, gay, bisexual and transgender (LGBT) young adults, who make up close to one-third of New York City’s homeless youth population. Gov. Cuomo’s cuts will hit these LGBT youth hard – kids who already have too few places to turn to for help, who have been rejected by their families, forced to flee homophobic foster homes, or who have experienced institutionalized homophobia from social service providers.
Time is running out, but we can still put pressure on Gov. Cuomo to reinstate funding for youth homeless services.
Each night in New York City, there are fewer than 300 beds to provide shelter to thousands of homeless youth – numbers that are already unjustly disproportionate by any measure. Yet if Gov. Cuomo approves his budget as is, the number of beds for homeless kids will be radically reduced, forcing kids to be turned away from shelters, and sent to spend each night on the streets.
The impact of these budget cuts could be downright alarming for homeless gay kids. According to the Ali Forney Center, a homeless shelter for LGBT young adults in New York City, LGBT homeless youth are at profound risk of harm if left on the streets, experiencing increased rates of drug use, depression, risk of violence, and a high possibility of being exposed to STDs, including HIV. Indeed, more than 60 percent of all homeless youth report considering or attempting suicide because they feel like they have no place to go, and no one who supports them.
Does Gov. Cuomo really want to own those consequences?
Send the Cuomo administration an urgent message that cutting youth shelter beds is the wrong way to deal with a state budget crisis, and will only exacerbate an already epic problem of homelessness among young adult populations in New York.
Throwing kids back on the streets during a time of need is no way to solve a budget problem -- financially or morally.
Photo credit: Ali Forney Center

Michael Jones is a Change.org Editor. He has worked in the field of human rights communications for a decade, most recently for Harvard Law School.
http://news.change.org
Over 5Million Reads Adam Gonzalez at March 29, 2011