Trump’s Buddy NetanyahuPM in Israel To Be Indicted For Corruption


Netanyahou and the Trump are so close they might as well could have been clone together. The orange and the overgrown olive that can not be use for wine nor vinegar. So close it reminds me a sclack of Port BBQ ribs. Their beliefs are mutual. Wether is what you do wih people behind your walls or the people with the wall you would like to built. Netanyau more than Trump came to power with very little but now he is a millionaire...well Trump came as millionair and now he is a billionaire but all of those things are tittles because if they go to jail, the money will dissapear in lawyer's fees, etc. 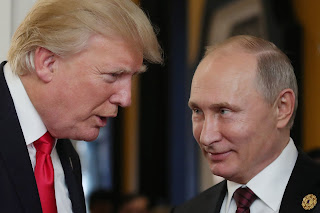 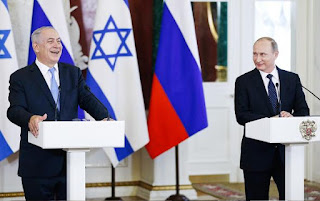 After months of anticipation, Israel's attorney general has told Prime Minister Benjamin Netanyahu that he is preparing to indict him on corruption charges.

It's a major blow to the long-serving premier and Trump ally, though not a final decision on an indictment. Netanyahu will still have a chance to hold off any indictment during a court hearing. And in the meantime, he remains in office and seeks reelection in April.

If Attorney General Avichai Mandelblit decides to press charges, which expert expect he will do, it would be the first time a sitting prime minister in Israel has been indicted.

The announcement shakes up Israeli politics just six weeks before voters decide whether Netanyahu gets another term. He has been serving as prime minister for a decade.

Second, he's facing more possible breach of trust and fraud charges charge — for trying to strike a deal with a newspaper publisher to advance legislation to help the publisher's business, in exchange for giving Netanyahu positive media coverage. The deal never went through.

The final case is the most serious one because the charges the attorney general is considering include bribery. Netanyahu allegedly approved a lucrative company merger for a telecoms businessman, and in exchange the businessman's news website gave Netanyahu favorable coverage.

Though Netanyahu will receive a hearing prior to a formal indictment, the authority will remain with the attorney general to decide. A final indictment could take a year or more. The hearing date has not yet been made public.

NPR News Interviews Israeli Prime Minister Benjamin Netanyahu
Netanyahu has called the bribery charge "absurd." He's decried the probe as interference in the upcoming Israeli elections, and described the accusations as a "house of cards."

He's accused Mandelblit of caving to pressure from the left and the left-wing media to rush to announce charges before the elections. The embattled prime minister is expected to address the Israeli public on Thursday evening.

This saga has divided voters. A recent poll from Haifa University shows about half of the public doesn't have much trust in the attorney general. At the same time, another poll from the Israeli television show Meet the Press said that 64 percent of Israelis wanted Mandelblit to announce his decision prior to the election, Haaretz reported.

Netanyahu has signaled that if indicted, he would remain in office and fight in court.

"Is it best for the country to be governed by a leader charged with serious criminal acts of corruption, or is it best for him to resign and focus on proving his innocence in the courts?" the institute said in a statement.

It warned about the "serious potential damage to the public's trust in the state's institutions caused by a situation in which the government is headed by an individual charged with criminal misconduct involving abuse of power."

In the upcoming vote, his base will still likely support him — indeed, in a Haifa University survey, 65 percent of his party's supporters said they believe law enforcement is trying to force Netanyahu out. That party, Likud, said Thursday that this announcement represented a "political witch hunt" aiming at toppling Netanyahu's government.

Other voters, though, may question his ability to lead the country amid an uncertain political future as he faces these charges.

Netanyahu has been the front-runner in the upcoming elections, but if his poll numbers slip — even slightly — it could tip the scales. He would need to build a governing coalition with other parties in order to stay in power, and with likely criminal charges hanging over his head, it's unclear if other parties will be willing to stay by his side.

There's also a new centrist list led by a former army general – who is strong in the polls and who could win instead.