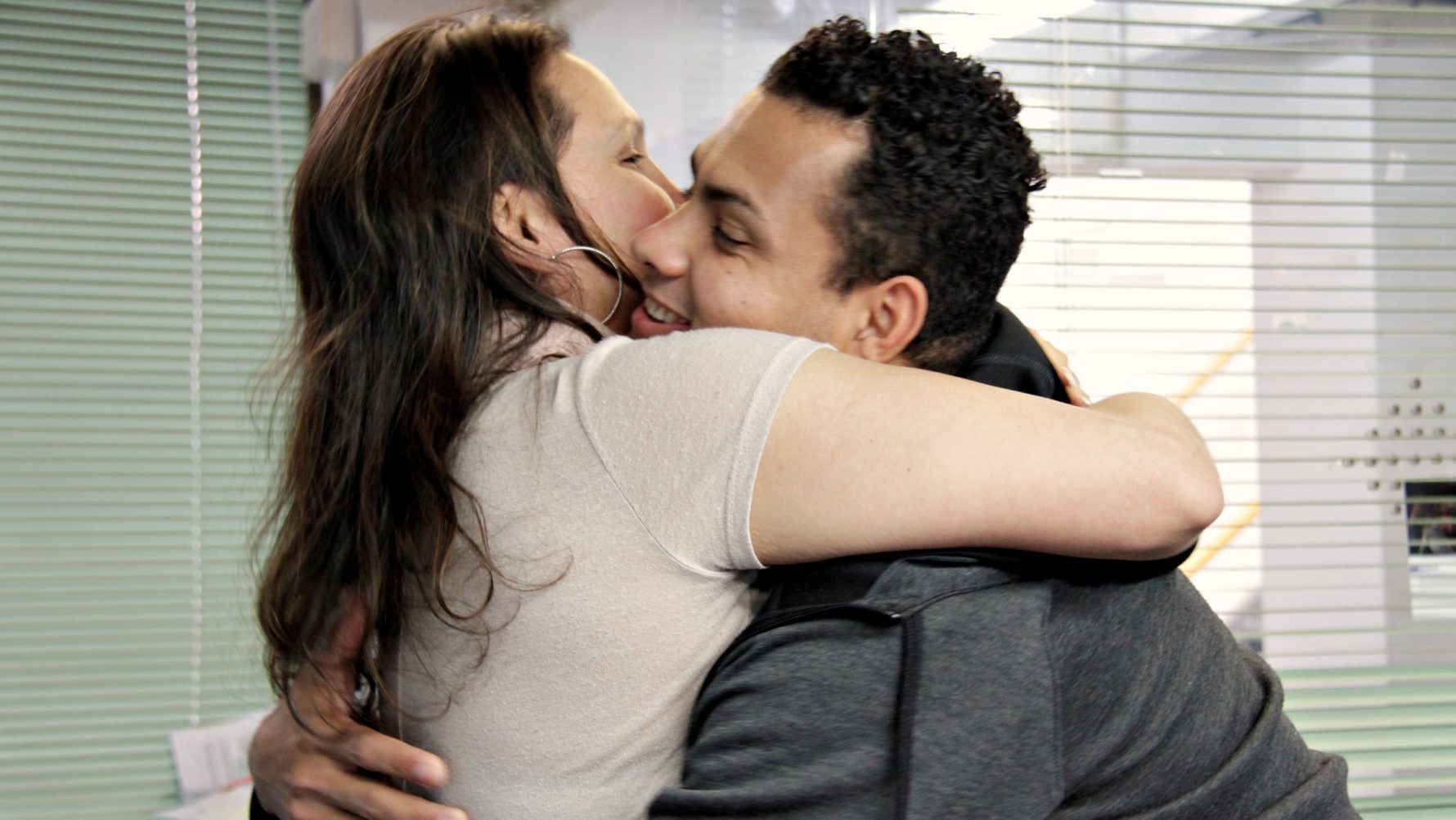 Alexander Flores Olivas (right) is one of 15 LGBTQ+ migrants from Central America seeking asylum in the District. He’s seen hugging Consuella Lopez (left) of Casa Ruby, a local nonprofit organization which took them in when they arrived on March 4, 2019.

A decade after leaving his parents’ home in Nicaragua for good, 22-year-old Alexander Flores Olivas is seeking asylum in the District.
He’s part of a group of 15 LGBTQ+ migrants from Central America who arrived in a caravan last week, fleeing violence and homophobia in their home countries. The group was taken in by Casa Ruby, a bilingual D.C. nonprofit that provides social services and programs to support LGBTQ+ community members.
Olivas said he had no choice but to run away. His father suspected that Olivas was gay, and made life unbearable for the young boy. He would beat up Olivas and invite others to join in. Soon Olivas was caught in a cycle of leaving home and returning, until one day he decided it was too unsafe to go back.
“The family was not accepting me,” said Olivas in Spanish, as Consuella Lopez, Casa Ruby’s director of external affairs, translates.
“The father tried to kill him on three occasions. He also had his brother try to kill him.”
Olivas picked up odd jobs in order to survive, and bounced from neighborhood to neighborhood. He longed for the freedom to just be himself. Years later, Olivas met a young man, Felipe Aguilar Dominguez, who eventually became his boyfriend.

The Long Road To America

Over the last two years, thousands of migrants have traveled to the U.S. and Mexico to escape rampant violence and poverty in Central America. Attacks by gang members, police officers and family members — along with a lack of job opportunities — are among the factors that push LGBTQ+ people to leave their home countries.
Meanwhile, the Trump administration’s latest effort to repel asylum-seekers was quietly successful — and is expanding. As part of what the administration is calling its “Migrant Protection Protocols,” some Central Americans have been turned back and told to wait in Mexico while their cases processed. The new policy has slowly ramped up at border crossing points. For migrants, that means waiting in underfunded or overcrowded shelters in unsafe cities such as Tijuana. It’s a fundamental shift in asylum policy, a legal protection you can claim while on American soil. For now, the vast majority of asylum-seekers are still allowed to remain in the U.S. pending their immigration court appearances. 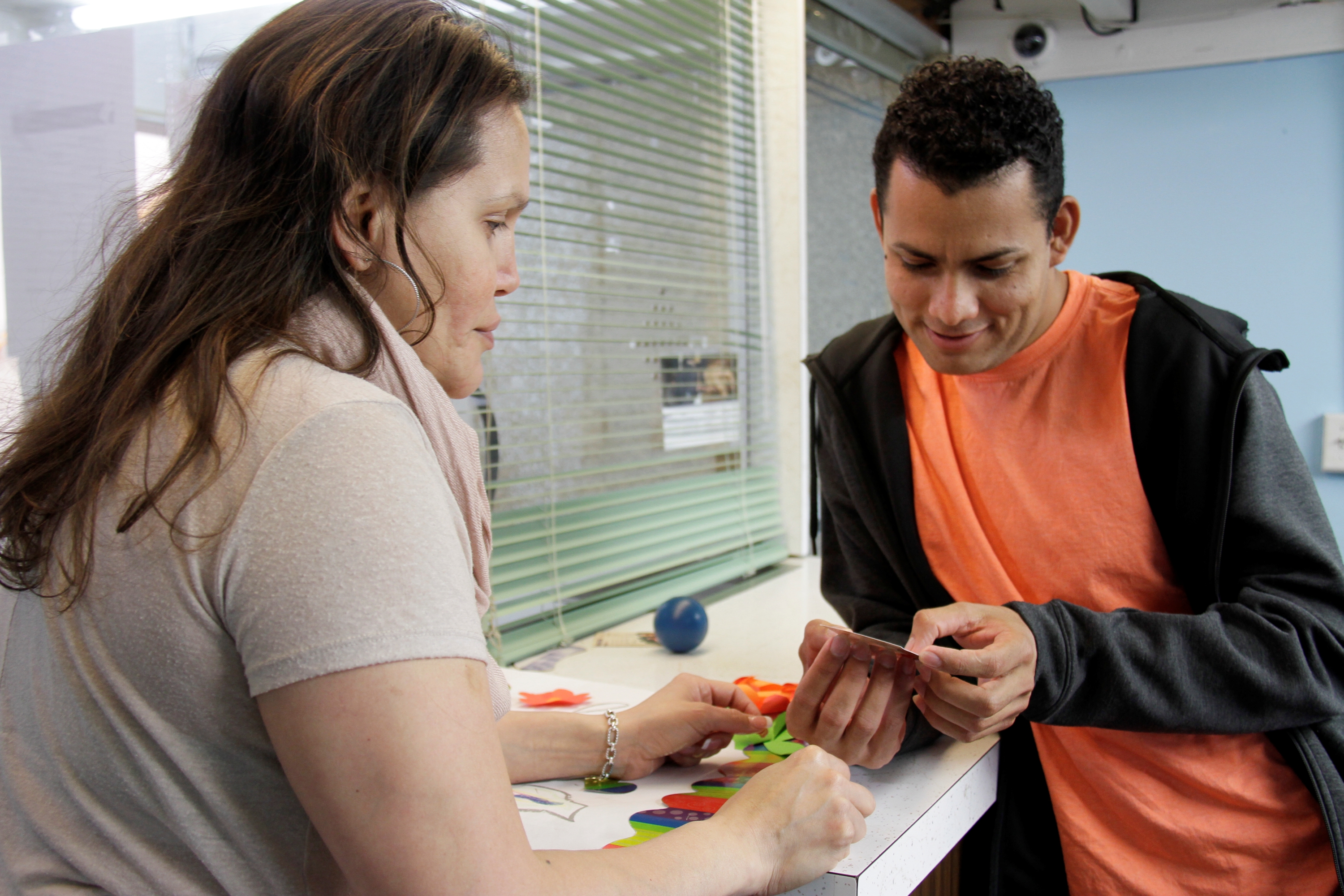 Alexander Flores Olivas (right) is one of thousands of Central Americans who have made the dangerous trek north to escape violence in their home countries. “I left with the hopes of not having to go through that again,” Olivas said.Sasha-Ann Simons / WAMU
Still, Olivas and his boyfriend, Dominguez, boldly decided to give it a shot last month. They traveled to Mexico to join hundreds of people in a caravan en route from Honduras to the U.S. border.
Olivas describes the chaotic journey. Some people nearly drowned, he said, trying to cross the Rio Grande, the river marking the boundary between Mexico and the United States. At one point, Olivas had to carry Dominguez because he can’t swim. Although people from all walks of life traveled in the caravan, Olivas says its LGBTQ+ passengers had it the worst.
“Even though the caravan is a unified people coming here, it’s still dangerous,” Olivas said. “People are singled out and some people left behind.”
Olivas was among some of the caravan’s LGBTQ+ passengers who separated from the larger group while trying to avoid gang members perched near a bridge along the route.
“And as soon as I stopped swimming and got out of the water, American immigration officers grabbed me and they put me in the jail cell,” Olivas said.

In Care Of Casa Ruby

Grassroots organizations in Central America worked to help the caravan carrying Olivas and Dominguez, and provided connections with organizations in the U.S. that could sponsor the migrants from El Salvador, Honduras and Nicaragua once they arrived. Olivas and his group were refused by five centers that did not accept LGBTQ+ migrants.
After receiving a call from U.S. Immigration and Customs Enforcement (ICE), Ruby Corado traveled to San Antonio to meet the migrants who had just been released from ICE custody. Corado, a transgender woman who was born in El Salvador and is Casa Ruby’s CEO, then rented a van and drove the group to D.C.
“As she was driving through the different states to get here, there were people, churches and friends to the cause who provided food, shelter, and showers to all of them,” said Larry Villegas, Casa Ruby’s deputy director.
Since their arrival last week, Villegas said Casa Ruby has helped the migrants get clothes, proper identification and medical help. And, he said, the migrants have gradually become more expressive through poetry writing, art projects and deep discussions with staff. The organization has received many donations for the group, including toiletries, cots and blankets, and cell phones for them to call family members back home.
Even though the caravan is a unified people coming here, it’s still dangerous. Not everybody makes it.
But after a joyful welcome, Villegas said, then came tears. Reality is setting in for some of the migrants. Although they found a new home, the hard part isn’t over. Questions like ‘Where am I?’ and ‘What happens next?’ are taking over their minds.
“You can still see people getting nervous when the police come here to Casa Ruby, even if they are just coming to check in and see if everybody’s safe,” Villegas said. “The uniform still triggers.”
The 15 migrants each await a pending court appearance on March 27. There, they will stand before a U.S. immigration judge for the first time and show their efforts so far to become productive community members in the District. Until then, Villegas said, Casa Ruby staff will continue working to get them acclimated to this foreign land in a place whose mission aligns with theirs.
“It is OK to be gay. It is OK to be transgender. It is OK to be who you are,” Villegas said.