Rugby Star Israel Folau Saved His Soul (?) by Stepping on Gays but Lost His $850k Rover and His Reputation

Land Rover has taken back their sponsored car from controversial Aussie rugby star Israel Folau.
The flash car was part of an $850,000 deal Land Rover had with Rugby Australia, reports the Sydney Daily Telegraph.
Land Rover, who said Folau was never an official ambassador, repossessed the car after Folau's anti-gay sentiments on social media.
In February last year, Dan Carter was dropped as a brand ambassador for Land Rover following his drink-driving incident in France.
Folau won't be catching the bus to Waratahs training any time soon though — he still gets around in style in his $500,000 Lamborghini, bought last year.
Land Rover's withdrawal of the car is the first financial hit Folau has taken for his fundamental Christian stance.
The 29-year-old Wallabies and Waratahs fullback followed up his initial comment with a video on Twitter warning that tolerance of homosexuality would be punished by God, but Rugby Australia has not sanctioned him due to the complex moral issues around free speech.
While RA disagrees with Folau, chief executive Raelene Castle said they also must respect his right to express his religious beliefs, adding that penalizing him would alienate a large section of their Christian supporter base.
Meanwhile, Wallabies coach Michael Cheika says Folau would refrain from posting further inflammatory content for the sake of his teammates as they prepare for the three-test June series against Ireland.
"What's happened has happened, it's been dealt with now and it's not going to be ongoing, so it's not going to be an issue," Cheika told Macquarie Sports Radio.
"There's been a lot of conjecture on this on this from all different sides, left wing, right wing and all that type of stuff. But we need to be focusing on the footy, and getting ourselves clear on a big series against the northern hemisphere champions.
"I'm going to be reminding guys what the team is about, what it means to be part of the team and then guys make their decisions from there.
"He understands that he doesn't want to affect the team around those sort of things. And like I said, if it's not ongoing then it's not going to be an issue."
"Izzy wants to be part of the team, not just now but in the future as well. Some people think he's using it as some kind of tactic to get out of playing but if he wanted to go, he could go easily. He wants to play rugby." 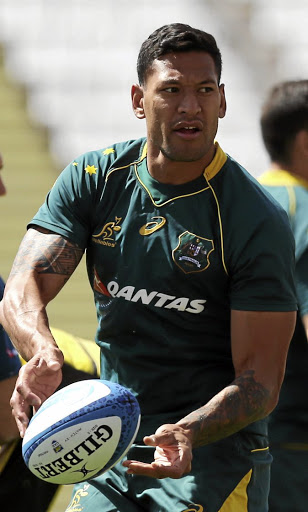 Sydney — Australian rugby star Israel Folau has once again courted controversy by posting a social media link to a video opposing same-sex marriage and referring to "sexual perversions beyond description".
The devout Christian, one of Australia’s most marketable players, caused a storm in April when he said gay people were destined for hell.
He escaped sanction by sports chiefs, despite Rugby Australia having an inclusion policy to stop discrimination, and a backlash from several high-profile players.
A defiant Folau, 29, last week said he had no regrets and would not back away from his staunch beliefs about homosexuality. In the video posted on his Twitter feed on Tuesday, the late American evangelist David Wilkerson warns against "tolerance" of same-sex marriage in an 11-minute sermon.
"We’re living in a time of unprecedented greed, rampant inequality, sexual perversions beyond description," he said.
It also showed people with rainbow flags, rats caught in traps and clocks ticking.
"With great love, I wanted to share this video in the hope that people watch it and think about it," Folau said.
"Jesus is coming back soon … please don’t harden your heart."
He took to Twitter again after a fellow Christian said he should have "love and grace" for everyone, regardless of their sexuality.
🦊 The bible says you can't serve two masters. If you want to dedicate your time to preach the coming of Jesus and decide who will or will not go Maybe having worldly possession as a car that only 1% of the population can afford is against the bible teachings, some will say... Being a pro in any sport takes all of your time and the last thing sport people want to listen to are sermons for that. They want sports! For preaching there are churches. But I have been a witness how these kids are brainwashed since they are able to recognized their parents they recognize the pastor. It is hammered into them that time is short and you need to go and preach. However, preachers are needed in every religion. He could switch professions since he liked telling who are the children of God and which are not.  Conversion means that you are changed and submerged into something else. Just be careful where are you submerged, get an education so you know the miracles of nature that no one can explain but at least you get to see them. That alone will keep you from judging. Even the Pope won't judge a gay person, why should you IZZY?