Chinese Broadcaster Censors The Rainbow at Show from Eurovision

The Eurovision Song Contest may be the ultimate in camp spectacle, but for viewers in China some LGBT elements of the singing competition have reportedly been censored.
Mango TV, which broadcast the semi-final of Eurovision, and is one of China's most popular TV channels, has come under fire by some on social media for apparently blurring rainbow flags and censoring tattoos.
According to the state-owned news organisation Global Times, Mango TV also decided not to air performances by Irish or Albanian delegations during Tuesday's event for various reasons. The second semi-final is on Thursday night.
The Voice of Homosexuality, a verified account on Chinese social media platform Weibo, shared a number of still images of some of the censored performances.

The post points out Mango TV, which was previously know as Hunan TV, broadcasts China's most popular show, Happy Camp, which has previously starred gay performers.  An account with tens of thousands of followers called Global Gay News also posted on Weibo to call the censorship "absurd" and ask "why is the rainbow flag not permitted?"

Responding to the post, some Weibo users called for people to "boycott Mango TV," and one user said they "absolutely won't be watching Mango TV next month".
Others said they were "going to rush out and buy a rainbow umbrella".
Weibo users also discussed Mango TV's decision not to air Ireland's entry into this year's competition.
Ryan O'Shaughnessy will be representing Ireland at the final in Lisbon on Saturday with a song about the end of a relationship. His performance was accompanied by two male dancers.  Recently there have been moves by the Chinese authorities to restrict the posting of LGBT content on social media, and in 2016 the authorities banned depictions of gay people on television.
Weibo user Mr Tito shared the full video of the Irish entry, referencing the missing performance on Mango TV.

Mango TV also reportedly did not broadcast the pop-rock performance by Albanian singer Eugent Bushpepa.
Many Weibo commenter's suggested censors had taken issue with the exposed tattoos of Bushpepa and his band mates. 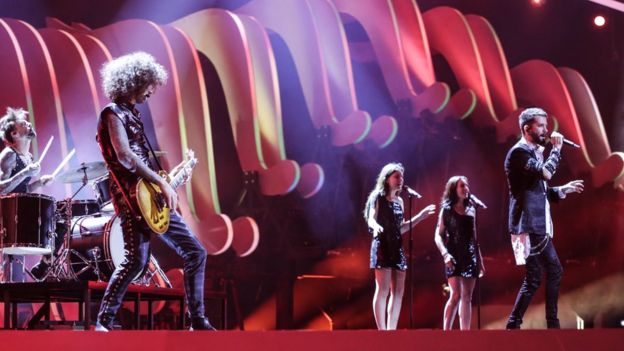 In January, the Chinese authorities took steps to restrict the broadcast of "subculture" elements, which included rules against displaying tattoos on TV.