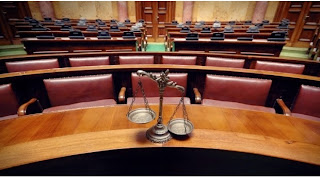 The courts keep taking Donald Trump both seriously and literally. And the president's word choices are proving to be a real headache.

A federal judge in Kentucky is the latest to take Trump at his word when he says something controversial. Judge David J. Hale ruled against efforts by Trump's attorneys to throw out a lawsuit accusing him of inciting violence against protesters at a March 2016 campaign rally in Louisville.

At the rally, Trump repeatedly said “get 'em out of here” before, according to the protesters, they were shoved and punched by his supporters. Trump's attorneys sought to have the case dismissed on free speech grounds, arguing that he didn't intend for his supporters to use force. But Hale noted that speech inciting violence is not protected by the First Amendment and ruled that there is plenty of evidence that the protesters' injuries were a “direct and proximate result” of Trump's words.

“It is plausible that Trump’s direction to ‘get 'em out of here’ advocated the use of force,” Hale wrote. “It was an order, an instruction, a command.”

It's merely the latest example of Trump's team arguing that his controversial words shouldn't be taken literally. But though that argument may have held water politically during the 2016 campaign, it has since repeatedly hurt Trump's cause when his words have been at issue in legal proceedings.

Just last week, a federal judge in Hawaii rejected an argument from Trump's attorneys asking that his travel ban executive order be evaluated without considering Trump's and his team's past comments about the motive behind the ban and whether it targets Muslims.

Trump's campaign in 2015 proposed a blanket ban on all Muslim immigration to the United States — the news release remains on his campaign website — and the courts ruled that this rhetoric was relevant when it halted his first travel ban, despite Trump's team arguing that it wasn't a Muslim ban. In striking down the first travel ban, the courts cited Rudolph W. Giuliani's comments that suggested Trump sought to make his Muslim ban idea legally practical.
“So when first announced it, he said, 'Muslim ban,'" Giuliani said. “He called me up. He said, 'Put a commission together. Show me the right way to do it legally.'”

When Trump and his team issued a revised travel ban a few weeks ago, the courts again halted it and again cited that past rhetoric.

And in extending that order last week, the federal judge in Hawaii yet again cited the words of Trump's team — specifically, top adviser Stephen Miller, who had suggested the second ban would be, practically speaking, the same as the first.

Trump and his team will undoubtedly dismiss this latest example as yet another activist judge who is out to get him. But yet again, they are forced into the position of saying that Trump's words shouldn't be taken at face value — that he didn't mean what he actually, literally said.

I've argued before that this is a completely unworkable standard when it comes to the media's coverage of Trump. It allows Trump team members to retroactively downgrade whatever they want to, while leaving the good stuff intact — essentially a Get Out of Jail Free card they can redeem anytime they want.

But while Trump’s supporters have certainly bought into that arrangement, the courts have yet again proved unwilling to grant the president that Get Out of Jail Free card.