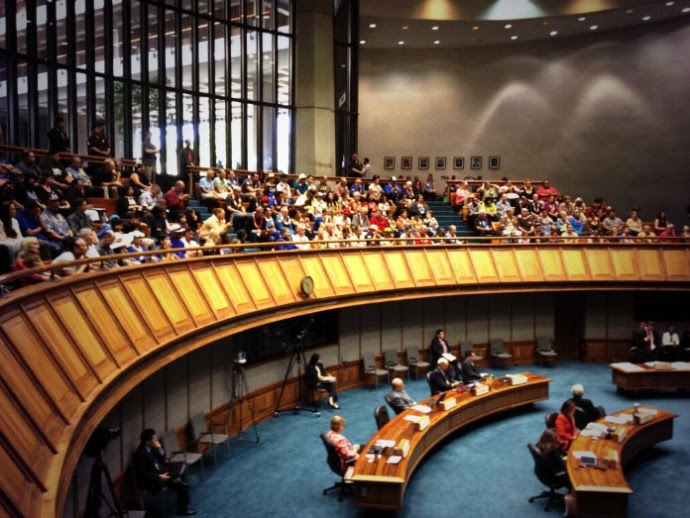 The state Senate passed a bill Tuesday legalizing gay marriage, putting Hawaii a signature away from becoming a same-sex wedding destination.
Gov. Neil Abercrombie, who called lawmakers to a special session for the bill and has vocally supported gay marriage, has said he would sign the measure. It will allow thousands of gay couples living in Hawaii and even more tourists to marry in the state starting Dec. 2.
Senators passed the bill 19-4 with two lawmakers excused. Cheers erupted inside and outside the gallery when the vote was taken, with a smattering of boos. Senate President Donna Mercado Kim, who voted against the bill, banged her gavel and told members of the public to quiet down.
More than half the chamber's lawmakers spoke in support of the bill, with many urging the public to come together to heal divisions within the community.
"This is nothing more than the expansion of aloha in Hawaii," said Sen. J. Kalani English, a Democrat from Maui.
An estimate from a University of Hawaii researcher says the law will boost tourism by $217 million over the next three years, as Hawaii becomes an outlet for couples in other states, bringing ceremonies, receptions and honeymoons to the islands. The study's author has said Hawaii would benefit from pent-up demand for gay weddings, with couples spending $166 million over those three years on ceremonies and honeymoons.
The Senate took up the bill a second time because of changes made in the House, where the bill was amended and eventually passed.
Abercrombie last week urged the overwhelmingly Democratic Legislature to pass the bill in its current form. Hawaii Attorney General David Louie said the measure is constitutional and legally sound.
The House amendments delayed the dates ceremonies could begin, slightly expanded an exemption for clergy and religious organizations, and removed regulations determining how children of same-sex couples could qualify for Native Hawaiian benefits.
The measure is the culmination of more than two decades of debate in the state, where two women in 1990 famously applied for a marriage license, touching off a court battle and eventual national discussion on gay marriage.
The case led to Congress passing the Defense of Marriage Act in 1996, part of which was struck down earlier this year by the U.S. Supreme Court. The decision that legally married same-sex couples could qualify for federal benefits led Abercrombie to call the special session in Hawaii.
The Senate vote puts Hawaii alongside Illinois, where a bill legalizing gay marriage is also awaiting the governor's signature. Another 14 states and the District of Columbia already allow same-sex marriage.
usatoday.com
Over 5.6 Million Reads Adam Gonzalez at November 13, 2013