Evolution and Homophobia in The Israeli Army

As I lay here with a broken foot thinking about something that is on my mind every time the subject of
Homophobia in the American armed forces comes up, I read an article that came up today in an Israeli Newspaper. In the US all the indications are that because the brass and congress thought gays would not be well received was just an excuse not to change DADT(Don’t ask don’t tell) the status quo. At the time we use Israel armed forces as an example of how it can work. Openly gay soldiers serving side by side with the closet ones and heterosexuals.
The armed forces tend to be a microcosm of the country they serve. You will find homophobes and people comfortable with their sexuality so not to care about anyone else’s.

The Times of Israel published a great story about this particular subject and it made it very personal by taking some of the gay soldiers life and how they cope with this life's situation. I think the piece speaks for it self and it gives us a synopsis of what it is to be gay and serve in the Israeli military. 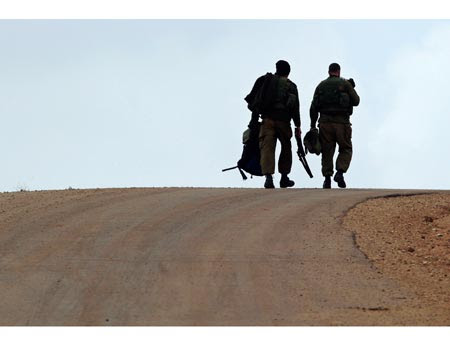 The IDF appeals court, in 1956, heard the case of two soldiers, male privates, who had been sentenced to a year in prison for consensual sex. At the time there was no mention of homosexuality in any of the General Staff’s orders but the civilian law deemed “relations not in the usual way” to be a criminal offense. A psychologist, Dr. Skali Avraham, testified before the court that homosexual behavior was deviant rather than criminal and that punishment would be of little value. The court accepted this argument and sentenced one of the soldiers to a day in prison and the other, ruled to have instigated the affair, to 70 days behind bars.
Twenty-one years later, in 1977, the Military Advocate General, Brig. Gen. Zvi Inbar, issued a set of directives to all military prosecutors entitled “The Trying of Homosexual Soldiers.” Inbar ordered prosecutors to file charges against soldiers who broke the civilian law — which decriminalized homosexual acts only in 1988 — solely in instances where: one of those involved was a minor; the sex was not consensual; one of the parties was unconscious; the sex was conducted in public; one of the soldiers was under the command of the other.
In 1993, “out of recognition that homosexuals are worthy of military service like all others,” the IDF, some 18 years before the US Armed Forces, formally opened the draft to all, regardless of sexual orientation. Five years later, the army cut the linkage between sexual orientation and security clearances and rescinded a standing order that required all commanding officers to report gay soldiers to military intelligence’s field security unit for further inquiry.
Today there are gay, bisexual and transgender soldiers in every part of the army and their rights are protected by an IDF order that prohibits degradation or harassment of any kind based on a soldier’s sexuality, “including sexual orientation.”

They are also eligible for rights that stretch beyond the civilian norms. The life partners of gay and lesbian career soldiers are entitled to 14 weeks’ paid maternity leave and an additional 12 weeks of unpaid leave, regardless of who the biological father is (so long as the other man has not also taken leave); their children are eligible for scholarships and nursery school subsidies, even if the career soldier is not the biological parent; and the life partner of a same-sex couple is recognized by the army as a wife or husband, entitling them to extensive subsidies on an array of purchases and, in the event that the officer dies, to a widow’s pension from the Defense Ministry.
The army weekly magazine Bamachaneh, distributed throughout the military and edited by the openly gay Maj. Yoni Shenfeld, has advocated for many of the changes and highlighted them as they’ve developed. In June, the magazine, which in 2001 was shut down for two weeks for running a cover story about a reserves colonel’s coming-out story, featured a career officer and his male partner — Lt. Col. Eitan Shatmer, the head of information systems in the IDF’s manpower department, and his partner Amir — who wanted to have a baby together with the help of a surrogate mother. The law in Israel, however, allows only married, heterosexual couples to pursue surrogacy. And so the two, after a long process, which could have cost Shatmer his job in many civilian companies, found a woman willing to carry the baby in the United States. “As part of the process we spent many weeks abroad, in a quantity that can no longer be considered vacation days,” Lt. Col. Shatmer said. “As far as the army was concerned, they were recognized as ‘fertility treatments,’ which allowed me to be absent without losing my job.”
To an extent that leniency extends to transgender soldiers, who by definition put the army to a series of tests: what sort of uniform should they receive, male or female? Where should they be housed, in the male or female quarters? And how long should they serve, 24 months or 36? These questions, some of which were raised by Adar Zarum, a former combat soldier and active reservist who runs Hoshen’s outreach program with the IDF, are just some of the dilemmas that the IDF and transgender soldiers must confront, and which are complicated by the fact that a teenager in Israel, Zarum noted, can only begin sex-change treatments at age 18, precisely when one is drafted to the military.
In the past, the army has allowed — already in 1999 — a male soldier to wear a women’s uniform, ruling, according to Bamachaneh, that the male soldier was “in every way a woman, excluding the body.”