Prosecutor Asks for 60 Yrs. For Bradley Manning, Which Means Life 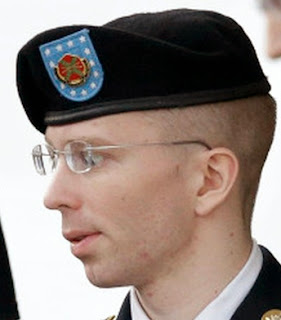 FORT MEADE, Md. - Army Pfc. Bradley Manning should spend 60 years in prison because he betrayed the U.S. by giving classified material to WikiLeaks, a prosecutor said Monday.
The soldier's defence attorney didn't recommend a specific punishment, but suggested any prison term shouldn't exceed 25 years because the classification of some of the documents Manning leaked expires in 25 years.
Coombs said Manning, who was 21 when he enlisted in 2007, had limited life and military experience. His youthful idealism contributed to his belief that he could change the way the world viewed the wars in Iraq and Afghanistan, and all future wars, by leaking the secret files, Coombs said.

"He had pure intentions at the time that he committed his offences," Coombs said. "At that time, Pfc. Manning really, truly, genuinely believed that this information could make a difference."
Manning faces up to 90 years in prison, but Capt. Joe Morrow only asked the judge to sentence him to 60 years. Morrow did not say during closing arguments of the court-martial why prosecutors were not seeking the maximum punishment.

A military judge convicted Manning last month of 20 offences, including six violations of the Espionage Act and five counts of stealing protected information.
"He's been convicted of serious crimes," Morrow said. "He betrayed the United States and for that betrayal, he deserves to spend the majority of his remaining life in confinement."
The judge, Col. Denise Lind, said she will begin deliberating the punishment Tuesday.

The 25-year-old native of Crescent, Okla., leaked more than 700,000 documents, including Iraq and Afghanistan battlefield reports and State Department diplomatic cables, while working in early 2010 as an intelligence analyst in Iraq. He also leaked video of a 2007 U.S. Apache helicopter attack in Baghdad that killed at least nine people, including a Reuters news photographer and his driver.
Manning took the stand last week and apologized for hurting his country, pleading with the judge for a chance to go to college and become a productive citizen.

Family members and a psychologist testified for the defence, saying the soldier felt extreme mental pressure in the military because of his gender-identity disorder during the "don't ask, don't tell" era.
Coombs presented evidence that Manning's unit needed intelligence analysts so badly that a supervisor failed to report to commanders his concerns about Manning's deteriorating mental health. Such a report could have prevented Manning from being deployed or resulted in his top-secret security clearance being revoked.
Coombs cited an incident in May 2010, when then-Master Sgt. Paul Adkins found Manning rocking in a fetal position on the floor in their workplace in Iraq. Manning had carved the words, "I want" into the vinyl part of a chair. Adkins testified he talked to Manning for about an hour until the soldier was calm, and then sent him back to work.

Coombs said Adkins should have escorted Manning directly to the unit's behavioural health office.
"The failure, the utter failure to take any action at that point is inexcusable," Coombs said.
Morrow said there were other people in Manning's unit who were openly gay and Manning did not hide his sexuality from them.
"It wasn't the military's fault, it wasn't the command's fault, it wasn't because he saw something horrible — it was because he had an agenda," Morrow said.
One Manning supporter in the court room bit her lip and shook her head in disapproval at Morrow's comments. Two others frowned.
Prosecutors have called Manning an anarchist computer hacker and attention-seeking traitor. The soldier's supporters have hailed Manning as a whistleblower.
Prosecutors also asked the judge to fine Manning $100,000, reduce his rank to private and give him a dishonourable discharge.
DAVID DISHNEAU AND PAULINE JELINEK
Over 5.6 Million Reads Adam Gonzalez at August 19, 2013