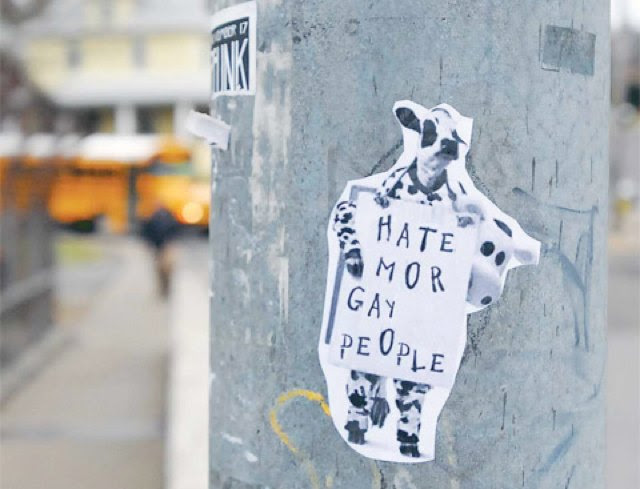 Policy? (via Towleroad).
People really dig the grub at Chick-fil-A but you know what the folks who run Chick-fil-A (or at least its charitable arm) don't dig? The gays. Not exactly surprising considering the chain's religious ties, but the amount of money it gives to homophobic groups should raise a few eyebrows. It had previously been discovered that the chain gave more than $1.1 million to anti-LGBT groups between 2003 and 2008, but now it turns out that in 2009, the most recent year in which the company's IRS 990 forms are available [PDF], it gave nearly two million more. Still craving that Chick-fil-A Deluxe Chicken sandwich?
Equality Matters has the full breakdown of the groups that Chick-fil-A's charitable arm, WinShape (created by Chick-fil-A founder and chairman S. Truett Cathy in 1984), gave money to and how those groups are working to hurt gay rights. Asked about the donations earlier this year, Cathy said, "We're not anti-anybody. Our mission is to create raving fans." But if you are just looking for names and numbers, these are the main donations from 2009 that might piss people off:

So, yeah, that's $1,733,699 to groups with anti-LGBT affiliations (yes that Exodus International is that Exodus International) out of a total of $2,678,985 in contributions WinShare made that year. Another interesting thing in WinShape's 2009 filing? In 2009 the Metro Atlanta Chamber of Commerce appears to have contributed $416,724 to the Foundation, the third largest contribution behind Chick-fil-A ($7,814,788) and the company's Delaware-based real estate arm CFA Properties ($7,000,000). Wonder if the people of Atlanta know about that?
gothamist.com
Over 5.6 Million Reads Adam Gonzalez at November 04, 2011