Joseph James DeAngelo, 72, is facing capital murder charges after being identified as the suspected serial killer and rapist responsible for 51 rapes and 12 murders in California between 1974 and 1986.

California authorities on Wednesday announced the arrest of the suspected Golden State Killer, who they say is responsible for 12 killings, 51 rapes, and more than 120 burglaries over a 12-year period.
Joseph James DeAngelo, a 72-year-old Sacramento resident, and former police officer was arrested early Wednesday, authorities said. He is ineligible for bail, jail records show.
Authorities said DeAngelo was a former cop in two different agencies. He was with the Exeter Police Department between 1973 and 1976 and then employed by the Auburn Police Department from 1976 to 1979 until he was fired for allegedly shoplifting a can of dog repellent and a hammer from a Sacramento drug store. Authorities said they were looking into whether he committed any of the alleged Golden State Killer–related crimes while on duty as an officer.
Police arrested DeAngelo when he stepped out of his house in Sacramento on Wednesday, the same area where he allegedly began his crime spree in the 1970s. Authorities said he was "very surprised" when apprehended. His family, including adult children, is cooperating with authorities, police said.
DeAngelo is facing capital murder charges for the March 1980 killings of Lyman and Charlene Smith, Ventura County authorities said. He was charged with two counts of murder with three special circumstances, including multiple murders, murder during the commission of rape, and murder during the commission of a burglary.
He is also charged with two counts of murder with special circumstances for the killings of Katie and Brian Maggiore in Sacramento, the county's district attorney, Anne Marie Schubert, said at a news conference.
"The answer has always been in Sacramento," Schubert said.
She added that the arrest came after a multi-jurisdiction effort to track the killer down using the latest in forensic technology.
"We all knew ... that we were looking for a needle in a haystack, but we all knew the needle was there," Schubert said. 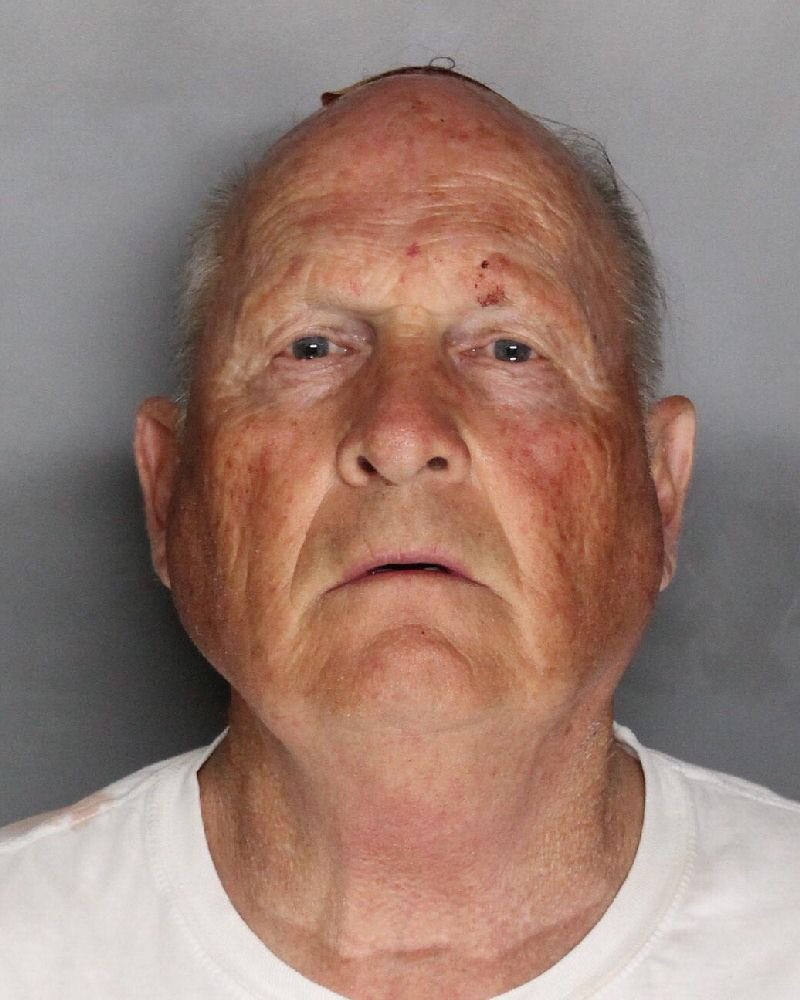 Federal and local authorities were observed outside DeAngelo's home in Citrus Heights on Wednesday morning, the Sacramento Bee reported.
The Golden State Killer was given various names, including the East Area Rapist, the Original Night Stalker, and the Diamond Knot Killer, and was wanted for a series of rapes, homicides, and burglaries in California between 1974 and 1986.
His alleged victims ranged in age from 13 to 41, and included women alone at home, with their children, or their spouses.
Starting in the summer of 1976, the authorities say the Golden State Killer was responsible for several rapes and burglaries in the Sacramento suburbs of Rancho Cordova and Carmichael. In 1978, the authorities say he fatally shot a couple who were walking their dog in Rancho Cordova.
He is then suspected of committing several rapes and homicides in Northern California, striking fear in residents, many of whom slept with guns at the ready and kept dogs for protection.


The method of attack involved breaking into victims' homes as they slept, shining a flashlight into their faces, and tying them up, according to the FBI. He then raped women residents and ransacked their homes, often stealing small items, such as coins, cash, identification, and jewelry. Some victims reported later getting phone calls from the suspect.
He would usually attack suburban couples, tie them up, rape the woman and then kill both of them, according to authorities.
However, after July 1981, no crimes believed to be connected to the Golden State Killer were reported until the 1986 rape and killing of an 18-year-old girl in Irvine. It was the last known crime related to the serial rapist and killer, whose crimes were linked through DNA.
In 2016, the FBI announced a reward of up to $50,000 for information leading to the Golden State Killer's arrest and conviction. He was described as a white male, approximately 60 to 75 years old, 6 feet tall with blond or light brown hair, and an athletic build.
FBI officials have said the suspect also appeared to have an interest or training in military or law enforcement techniques and that he was proficient with firearms.
The case was back in the spotlight earlier this year after a book on the Golden State Killer, I'll Be Gone in the Dark, was published. The book was written by the late Michelle McNamara, a crime journalist who "was determined to find the violent psychopath."
McNamara was still writing the book at the time of her death, but it was completed and published this year after her husband, Patton Oswalt, got an investigative journalist, Billy Jensen, and McNamara's lead researcher on the book, Paul Haynes, to complete her work.
In tweets celebrating the bittersweet moment, Oswalt credited the suspect's capture, in part, to his wife's work.
"She kept coming at him," Oswalt said in one tweet.
Over 5.6 Million Reads Adam Gonzalez at April 25, 2018