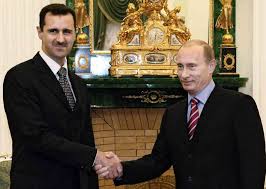 The start of this year proved deadly for one unit of about 100 Russian fighters supporting President Bashar al-Assad's troops in northern Syria.

On Feb. 3, 38-year-old Maxim Kolganov was killed in a firefight with rebels near Aleppo when a bullet pierced his body armor and heart. Then, on March 9, the same unit came under shell-fire near Palmyra, and Sergei Morozov, also 38, was hit and died on the way to hospital.

Back in southern Russia, medals were delivered to their families: the order of bravery, with certificates signed by President Vladimir Putin. The medals, seen by Reuters, were intended to honor the sacrifice they had made for their country.

Except Kolganov and Morozov were not employed by the Russian state. They were in Syria as private contractors, a small part of an army of such people who are being deployed secretly by the Kremlin in Syria.

The deaths of Kolganov and Morozov, and others like them, have not been made public. Families say they were given little information and told not discuss the cases. In at least one case that Reuters uncovered, the family of a fighter killed in Syria received a payout of around $100,000 in compensation.

Officially, Russia is participating only in an air war over Syria with a small number of special forces on the ground. Moscow denies that its troops are involved in regular ground combat operations.

However, in interviews with more than a dozen people with direct knowledge of these deployments, Reuters has established that Russian fighters are playing a more substantial role in ground combat than that the role the Kremlin says is being played by the regular Russian military.

The sources described the Russian fighters as contractors or mercenaries, hired by a private company, rather than regular troops. But despite their unofficial status, according to these accounts, they operate in coordination with the Russian military and are given privileges back home normally available only to serving soldiers.

Reuters was not able to determine the precise number of such Russian mercenaries fighting in Syria, nor the total number of casualties they have sustained, but three people familiar with the deployments said there were many units of a similar size to the one that included Kolganov and Morozov.

Neither the Kremlin nor the defense ministry responded to questions from Reuters. Reuters was unable to obtain comment from Syrian officials on the question of Russian mercenaries.

Reuters was not able to identify the company or companies that hired the fighters, or the source of any payments to the fighters or their families.

Under Russian law, it is illegal to work as a private military contractor in another country. However, Russian citizens have participated in wars across the former Soviet Union throughout the 25 years since it broke up in 1991.

In 2014, large numbers of Russians fought openly on behalf of pro-Moscow separatists in Ukraine. Western countries say those rebel units were organized, paid and armed by Moscow; the Kremlin says any Russians there were independent volunteers.

Last year, Russia joined the war in Syria, its first conflict outside the borders of the former Soviet Union since the Cold War. Word got out among veterans of the Ukraine conflict that mercenaries were needed.

According to three people who knew Morozov and Kolganov, both had fought in Ukraine as part of the same unit that would eventually take them to Syria. It was led by a man who goes by the nomme de guerre "Vagner", who has become a leader of Russian mercenary forces in Syria, one of the sources said.

Little is known of his real identity. Two of Vagner's comrades say he had already traveled to Syria as a mercenary in 2013, before commanding his group of Russian fighters in eastern Ukraine. He then headed back to Syria, where Russia began its intervention in Sept. 2015.

A Russian-language website, Fontanka, has published what it says is the only known photo of him, a picture of a bald man in military fatigues striding near a helicopter. The website said his name was Dmitry Utkin. Reuters could not verify the image or the name.

One Ukrainian rebel commander who was close to the Vagner group in eastern Ukraine said many of the fighters there were tempted to fight in Syria because they had found it difficult to return to civilian life.

"I meet them now and see how much they have changed. I simply have nothing to discuss with them. They can't imagine any other life but war. That's why they go fight in Syria."

Morozov, the fighter who was killed near Palmyra, had returned from Ukraine to his home in southern Russia and dabbled in local politics.

He served as an aide to a member of parliament originally from his native city of Samara, Mikhail Degtyaryov. Degtyaryov told Reuters Morozov was a friend and confirmed that he had died in combat during the battle for Palmyra.

"Kapa", a former Russian officer and volunteer in the Ukraine conflict who asked to be identified only by a nomme de guerre, was friends with Morozov and also knew Kolganov and several other Russians who fought in Ukraine and went on to fight in Syria with the Vagner group. He is still in contact with some of them.

He said Morozov became frustrated when he attended a meeting of the far-right LDPR party, and no one listened to him. Morozov gave up lucrative business ventures to rejoin his Vagner comrades in Syria, Kapa said.

According to Kapa, Russian veterans of the Ukraine fighting were recruited for ground combat in Syria when it became clear that Syrians would not be able to hold ground without help, despite Russian air support.

"The Arabs are not warriors by nature, but are thrown together and told to storm high ground. They don't know how to storm it let alone conquer their instincts and move towards the bullets. How can you make them do it? Only by setting yourself as an example," Kapa said. "That's why our guys reinforced their units."

Asked if fighters in the group coordinated with the Russian defense ministry, Kapa said: "Of course".

According to two people who knew different fighters, they arrive in Syria via ships that land in the port of Tartous, leased by the Russian navy, or in military aircraft that land at Russia's Hmeymim air base in western Syria.

The doctor, who spoke on condition of anonymity because he feared losing his job, said he had personally treated contractors injured in Syria, whose role there was clear from their conversations.

His hospital is officially meant to admit only serving military personnel, their family members or veterans who have served long careers in the military, a category his patients were too young to fit, the doctor said.

When Morozov and Kolganov were killed, their bodies were flown to Russia aboard military aircraft and delivered to a morgue used by the military in the southern city of Rostov, according to relatives and Morozov's friend Kapa.

A Reuters reporter saw the Order of Courage which was given posthumously to Kolganov. It was delivered to his family home in Togliatti, a city on the Volga river, by someone in civilian clothes who did not identify himself, according to relatives. Reuters has also seen a photograph of Morozov's Order of Courage, dated Sept. 7, 2016.

Kolganov never told his relatives where he was deployed, but pictures he sent contained clues. One of them, in which he posed under an orange tree, is now on the wall of his parents' house.

The family got proof he was in Syria only after his death, when they saw his passport with a Syrian stamp in it.

In another case, a 55-year-old Russian woman said her husband was killed this year while working as a military contractor in Syria. She did not want her name, or her husband's, to be published because she feared reprisals.

"They only told me about it after his death. A young man ... phoned and told me. And he also threatened me, so I would never tell anyone about it," she said. "They are scary people."

By contrast, Russian authorities do acknowledge some combat deaths among serving military personnel, though often with a delay and without keeping an official tally.

Reuters was unable to determine how many Russians have died in Syria. According to Kapa, the small unit that included Kolganov and Morozov has lost four fighters since the start of the Russian campaign in Syria, including its commander, killed in the same firefight as Morozov. Dozens have been wounded.

Reuters earlier reported that Russian major Sergei Chupov was killed in Syria on Feb. 8 He also belonged to the Vagner group, a person who knew him told Reuters.

The doctor at the military hospital who spoke to Reuters said that the surgical department where he works had treated six or seven Russian fighters back from Syria with combat injuries who were not serving Russian servicemen.

The overall number of wounded contractors treated at his hospital could be a few times higher, the doctor said. He also says he knows of at least two more hospitals in Moscow and Saint-Petersburg where contractors are treated.