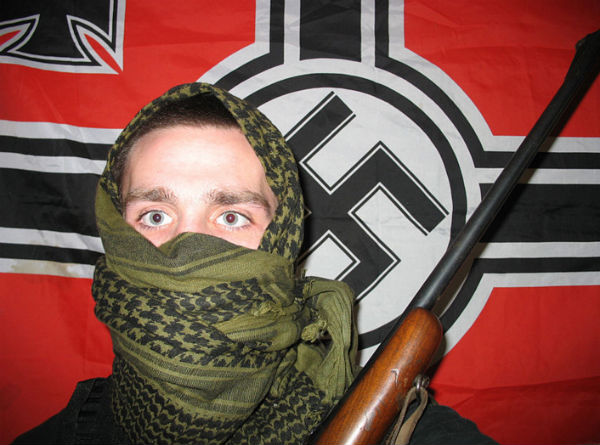 A Neo-Nazi in the United States – Photo: Froofroo, via Wikimedia.
A new report from the Southern Poverty Law Center finds the number of hate groups in the United States has increased for the second year in a row. SPLC, which conducts a yearly census of hate groups and other extremist organizations, attributes part of this increase to the rise of the “radical right,” which they say was energized by the candidacy of Donald Trump.
According to the SPLC’s Intelligence Report, he most dramatic increase occurred in the number of anti-Muslim hate groups, which almost tripled in number, from 34 in 2015 to 101 in 2016. SPLC notes that the growth in anti-Muslim groups has accompanied a number of crimes targeting Muslims, including the burning of a mosque in Victoria, Texas just hours after the Trump administration issued an executive order suspending travel from a list of seven Muslim-majority nations.
The total number of hate groups currently operating in the United States is up to 917, up from 892 in 2015. While the number of hate groups reached its peak in 2011 — when there were 1,018 active groups — this year’s total number of hate groups is still high by historical standards.
“2016 was an unprecedented year for hate,” Mark Potok, an SPLC senior fellow and editor of the Intelligence Report, said in a statement. “The country saw a resurgence of white nationalism that imperils the racial progress we’ve made, along with the rise of a president whose policies reflect the values of white nationalists. In [Presidential Adviser] Steve Bannon, these extremists think they finally have an ally who has the president’s ear.”
The Intelligence Report finds that there are 52 active groups whose mission is expressly anti-LGBT, though other groups typically associated with white nationalism, Neo-Nazism, or other causes may also hold anti-LGBT views. Locally, there are five anti-LGBT hate groups listed for the D.C./Virginia/Maryland region: the Traditional Values Coalition, the Family Research Council, and the Center for Family and Human Rights, in Washington; Public Advocate of the United States (run by notorious anti-LGBT former Loudoun County Supervisor Eugene Delgaudio) in Falls Church, Va.; and Mass Resistance Virginia, in Yorktown, Va.
There are 21 recognized hate groups in total whose operations are centered in Washington, D.C., 18 in Maryland, and 39 in Virginia — most of which are located in Northern Virginia or the Hampton Roads areas. Some of the more infamous ones in our area include ACT for America, an anti-Muslim organization in Leesburg; American Renaissance/New Century Foundation, in Oakton; the Southern National Congress, in Alexandria; the East Coast Knights of the True Invisible Empire, in Annapolis; the League of the South, in Clements, Md.; and the Council of Conservative Citizens, a white nationalist group based in Silver Spring, Md.
SPLC notes that the number of hate groups likely understates the level of organized hatred in America, as a growing number of extremists operate mainly online and are not formally affiliated with recognized hate groups.

John Riley is the local news reporter for Metro Weekly. He can be reached at jriley@metroweekly.com
Over 5.6 Million Reads Adam Gonzalez at February 19, 2017