[Context]
I was sent to work in Rochester by my company after being given choices of Conn and PA.
I decided to stay in NY State on which I had spent most of my life.  Rochester had a good reputation as a growing good community and therefore a good environment to continue the expansion of a retail chain of stores.

In Rochester to my surprised, I found a large gay community many of which where out in the sense they had partners and were not hiding that fact. The people there used to mind their own business and not afraid of other people. You had Xerox and Kodak in the heart of Rochester, therefore you had people coming from out of the area to work for these two Monmouth companies.  As a result you had different communities establishing foot there.

I was only in Rochester for a year before being transferred a couple hours south to Buffalo. Years after I was out of NY altogether I heard of the bad news concerning both Xerox and kodak, particularly Kodak which had been hit so bad in those economic times and was laying off people instead of hiring. I can only imagine what the unemployment could have done to that town.
It is a universal fact in  the United States and in most countries that when things go bad there is always someone within the community to blame. Now we have a President who encourages bias to people born else where. These things matter in bringing out the bias some people carry naturally due to their upbringing and environment which usually starts with bad economic times or when you have the people on top of the governing cheering discrimination on. This is how it manifests in brining out  homophobia, bias and bigotry.
Adam Gonzalez 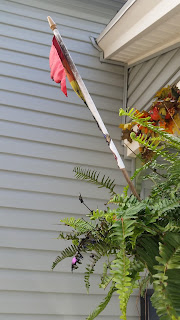 The Gay Alliance of the Genesee Valley says there has been an increase in reports of bias-motivated incidents in the Rochester area in the last three months.

Rochester police are investigating the apparent theft of two gay pride flags and one Black Lives Matter flag on Garson Avenue over the weekend.

Gay Alliance executive director Scott Fearing said he was told by a board member who lives on that street that closer to ten LGBTQ flags are missing from residents' yards.

Fearing said since the November election, his organization has received calls about six separate incidents, including the burning of a gay pride flag on Election Day.

"And we're also hearing more incidents of name-calling and what you might want to call bullying, but is actually about a hate crime and bias-motivated incidents; people being put down, called names."

Fearing said he spoke to the victim of an alleged hate crime in Victor who was reportedly one of two men physically assaulted at a tavern last week. WXXI News has been unable to confirm any details of the alleged incident with Ontario County law enforcement or the district attorney’s office.

Fearing believes the reports his office is receiving are connected to the current political climate in the country, and people feeling empowered to act out against others who see as unworthy.

"I thought we had moved on in the world and we were starting to understand that diversity isn't a bad thing and that we're all neighbors and the better that we treat each other, the better we all can live. Seeing the spike here in these bias-related incidents is very disheartening both personally and professionally."

Fearing said of the six incidents he personally knows about in the past three months, only two have been reported to law enforcement. He said victims are often afraid to go to police because they fear the crimes won't be taken seriously.

A spokesperson for RPD says police have yet to make any arrests in connection with the burned rainbow flag in Winton Village in November.