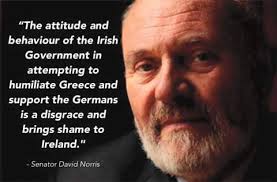 I don’t recommend anybody to go without sex but I most admit I was moved by Senator Norris story. In a world in which you have one of the co founders of the HRC (Human Rights Campaign, the largest political gay group) between court and jail fighting what grown men now say he did when they were teenagers. He is trying to settled but the prosecutor wont aloud it to happen on the latest case. He can take a chair on the side of many child molester priests and the famous multi split personalities ‘Bill Cosby’ who hid his real sick self behind the image of a trusted friend to pretty young ladies that claim he drug them to then have sex with them while they were passed out. A real peace of work! Even Whoopi Goldberg still backs him against all the evidence because he is black and a friend and her black friends don’t do that….On the back drop of all these filth we hear about Irish Senator David Noris who still speaks out against injustices, be gay or straight, black or white. I am proud to share this story with you.  Adam

A gay rights campaigner has revealed he went 40 years without sex because he was afraid of bringing disgrace on the movement for equality.
Senator David Norris says he “lived the life of a bloody nun” during this period because at the time having sex with another man was a criminal offence in Ireland.
Senator Norris said: “For 40 years I didn’t even enter a public lavatory in Dublin, any sort of indiscretion on my part would’ve been highlighted by the media.
“In those days the most dangerous thing was to be noticed, to be known as gay, you couldn’t afford it.
“Your job, your friends, your status and your livelihood would be gone.”
But the former presidential candidate also confessed to playing the field and enjoying casual sex in his youth, reports the Irish Mirror.
The 71-year-old said: “I certainly had a good time before the movement started. I was a good looking man and I was the toast of Dublin.
“If you brought someone home, the last thing you wanted to know was their name, you didn’t want them finding you in the phone book.
“I was with some lovely, intelligent and interesting people but it never led to anything – they all had to be one-night stands.”
Norris also told O’Connor about his joy at the passing of the recent marriage equality referendum.
He explained: “It was the end of a very long process, a 40-year struggle and to make that journey was quite extraordinary.
“There were no people out at all in my day, homosexuality was a word which would stop conversation in a polite society. I was seen as a criminal and an outsider.
“To go from that to seeing everyone so happy – grandparents, husbands, wives, parents – is wonderful.
"I get great satisfaction seeing young people happy together, positive and contributing to life.
“People of my generation were badly affected by the stigma, the shame and the sense of isolation.
“I dealt with people forcibly subjected to electroconvulsive therapy and it really scrambled them, but all that tragedy is now behind us.”
The campaigner has recently battled cancer but was quick to dismiss any rumours of retirement following his illness, adding he expects to contest the next poll.
He said: “I may pull out late on, but for anyone who think I’m retired, I’m going in the next election.”
But the Senator did admit liver surgery had taken its toll.
He added: “The body is a bit shattered, but the mind is still as active and aggressive as ever.”
It may be hard to believe but same-sex activity in Ireland was only decriminalised in June 1993.
The change in law was down to a campaign spearheaded by David Norris which started in the 1970s.
His bid to decriminalise homosexuality was defeated in 1980 in the High Court and the Supreme Court.
The campaign’s efforts were rewarded in 1988 when he won a case in the European Court against the Irish State over the constitutional status of homosexual acts.
That paved the way for the decriminalization, the Civil Partnership Bill in 2010 and this year’s marriage equality referendum.
DAVID MAHER
mirror.co.uk
Over 5Million Reads Adam Gonzalez at July 17, 2015