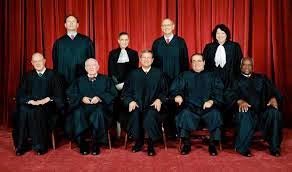 The Supreme Court faced one of the biggest issues in its history Monday and turned its back.
Rather than decide the issue of same-sex marriage, as virtually everyone involved in the debate expected, the justices simply let stand lower-court rulings striking down bans in five states. Within hours, marriages were set to take place.
And the justices knew their decision to stay out of the grand national debate would have further repercussions: Within days or weeks, gay marriage could be legal in 30 states representing 60% of the U.S. population. Nine more states in the Midwest and West could be added very soon if appeals courts there join the juggernaut.
Why did the Supreme Court take a pass? Most likely because it lacked the votes to stop what federal and state court judges have started. 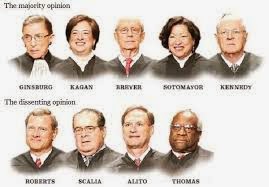 On the Republican ultra conservative justices they knew how to count. They have four the other side had 5. They took a pass which makes law the decisions by the appeals court, which the gay marriage issue has won in about 30 cases.

"The far more conservative justices couldn't count to five," said Jon Davidson of the gay rights group Lambda Legal. “They were not assured of a fifth vote, and so they didn’t want to grant review yet."
The Supreme Court refused to get involved in the national debate over same-sex marriage Monday, leaving intact lower court rulings that will legalize the practice in 11 additional states.
The unexpected decision by the justices, announced without further explanation, immediately affects five states in which federal appeals courts had struck down bans against gay marriage: Virginia, Indiana, Wisconsin, Oklahoma and Utah.
It also will bring along six other states located in the judicial circuits overseen by those appellate courts: North Carolina, South Carolina, West Virginia, Colorado, Kansas and Wyoming. Lower court judges in those states must abide by their appeals court rulings.
Across the USA: Reaction to same-sex marriage decision
The action eventually will bring to 30 the number of states where gays and lesbians can marry. Appeals courts in Cincinnati and San Francisco are considering cases that could expand that number further, presuming the Supreme Court remains outside the legal fray.
"The court's letting stand these victories means that gay couples will soon share in the freedom to marry in 30 states, representing 60% of the American people," said Evan Wolfson, president of Freedom to Marry. "But we are one country, with one Constitution, and the court's delay in affirming the freedom to marry nationwide prolongs the patchwork of state-to-state discrimination and the harms and indignity that the denial of marriage still inflicts on too many couples in too many places."
Most court-watchers had predicted the justices would hear one or more cases this term and issue a verdict with nationwide implications by next June. But the justices, perhaps sensing that the country is headed toward legalizing gay marriage without their involvement, chose to deny states' appeals. 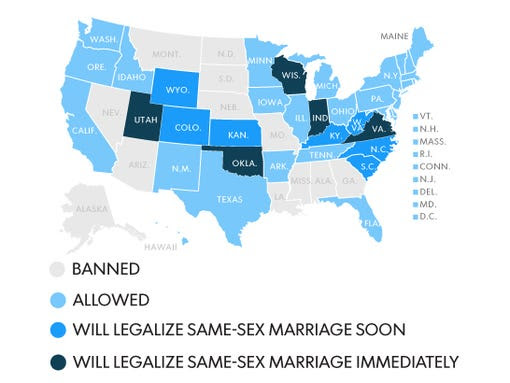 The Supreme Court refused to get involved in the national debate over same-sex marriage Monday, leaving intact lower court rulings that will eventually lead to legalizing the practice in 11 additional states.(Photo: Renee Klahr, USA TODAY)
What happens now will occur in stages. The five states whose petitions were denied will have same-sex marriages almost immediately -- starting at 1 p.m. Monday in Virginia. In the other six, either attorneys general will clear the way or another court proceeding will be necessary.
Carol Schall, one of the plaintiffs in the Virginia case, was at work when she got an e-mail from colleagues saying the high court had denied the state's appeal. "Marriage legal," it said.
“My office mates heard a gasp from my office … only to see me in a puddle of tears," said Schall, who had sued to have her California marriage to Mary Townley recognized in Virginia, where they live. The number of states with legalized gay marriage could quickly expand to 35 states if the 9th Circuit Court of Appeals denies bans in Idaho and Nevada, which could happen any day. That ruling would affect Alaska, Arizona and Montana as well.
Cases from Michigan, Ohio, Kentucky and Tennessee are pending before the 6th Circuit appeals court, which has been seen as a panel that could uphold bans in those states. If it goes the same way as the others, the list of states could expand to 39.
Opponents of same-sex marriage said they would not give up the fight, despite the court's decision. "Several federal courts ... still have cases working their way to the Supreme Court," said Byron Babione, senior counsel at Alliance Defending Freedom, which had defended the Oklahoma and Virginia bans. "The people should decide this issue, not the courts."
Nineteen states and the District of Columbia permit same-sex marriage, and the high court ruled last year that the federal government cannot deny benefits to such couples. It sidestepped the remaining state laws by taking no position on the merits of California's ban, which had been struck down by lower federal courts.
Since those decisions were handed down, six additional states have legalized gay marriage, and federal and state judges in at least 14 more states have overturned marriage bans, beginning with Utah last December. All those rulings had been put on hold during the appeals process, leaving 31 bans in place — until Monday. Any time same-sex couples are extended marriage equality is something to celebrate, and today is a joyous day for thousands of couples across America who will immediately feel the impact of today's Supreme Court action," said Chad Griffin, president of the Human Rights Campaign, the nation's largest gay rights organization. "But ... the complex and discriminatory patchwork of marriage laws that was prolonged today by the Supreme Court is unsustainable. "The only acceptable solution is nationwide marriage equality."
The cases that had been under consideration included those from three federal appeals courts:
• A three-judge panel of the U.S. Court of Appeals for the 10th Circuit ruled 2-1 in June and July that same-sex couples in Utah and Oklahoma have "the same fundamental right" to marry as heterosexuals.
• A three-judge panel of the U.S. Court of Appeals for the 4th Circuit ruled 2-1 in July that gay men and lesbians have a constitutional right to marry that is paramount to state marriage laws.
• A three-judge panel of the U.S. Court of Appeals for the 7th Circuit declared unanimously last month that gay marriage bans in Indiana and Wisconsin threaten "the welfare of American children."
Last month, a federal district judge in Louisiana became the first to uphold a state's ban in the wake of last year's Supreme Court rulings. Until then, gay marriage proponents had won every federal case.