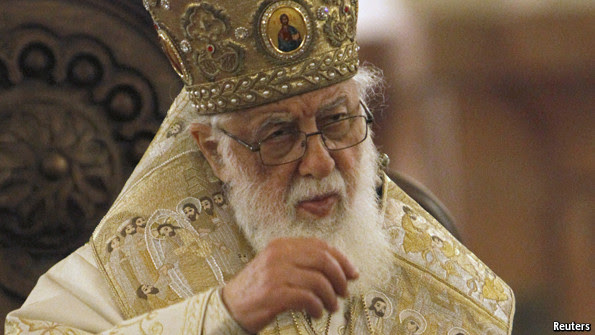 EUROPE stands accused of many failings in recent months, including weakness, internal division and naivety. But to hardline Georgian churchmen, the continent’s greatest sin is depravity. Europe’s promotion of tolerance for homosexuality, they say, threatens the very foundation of Georgian society.
The discussion became more heated after the government’s adoption of an anti-discrimination law on May 2nd. The law is central to further progress towards visa-free travel in Europe, and lays the basis for the Association Agreement with the European Union, which Georgia is planning to sign on June 27th. Although human rights activists had hoped for stronger enforcement mechanisms, they see it as a significant step in the right direction.


The inclusion of “sexual orientation” and “gender identity” as unacceptable grounds for discrimination aroused the passions of the Orthodox Church. The Patriarch (pictured), who is by far the most respected public figure in Georgia, thundered that “believers would not accept” a law that “legalised illegality”. Individual clerics went further in addressing parliament, warning politicians of the perils of confronting the church. Excitable protesters worried about the “genocide of the nation”. Whether the EU’s ambassador’s reassurancethat reading Plato had not made him gay had any impact is unclear.
A year ago, on the international day against homophobia (IDAHO), a massive, church-led counter-demonstration in Tbilisi broke up a small gay rights demonstration and left demonstrators in fear for their lives. This year, Georgia’s beleaguered gay rights activists declined to rally on that day. Instead, they registered their invisibility with an imaginativeart installation of 100 empty pairs of shoes left on Tbilisi’s Pushkin square.
The church, meanwhile, moved to re-claim IDAHO as a national family day. A few hundred churchmen and supporters marched through Tbilisi’s streets and protested against the anti-discrimination law outside of the former parliament building. This suggests that homophobia has triumphed in Georgia but polls taken just before the eruption of the controversy over the anti-discrimination law show that 24% of Georgians surveyed said that gay rights were important; in June 2013, only 16% did.
This has an unlikely bearing on the country’s foreign policy, as Vladimir Putin, Russia’s president, is trying to harness homophobia in Russia’s “near-abroad” in his bid for leadership of the anti-western world. Yet that may not sway ordinary Georgians. Their inclination towards the EU and NATO is stronger than their rejection of homosexuality, according to polling data.
Davit Usupashvili, the parliamentary speaker, said that the anti-discrimination bill represented a choice between Russia and the EU. After frantic negotiations behind the scenes, parliament adopted it unanimously. To shore up ties, a flurry of European bigwigs have visited Tbilisi in recent weeks, including the French president, the foreign ministers of Germany, France, and the UK, and Herman Van Rompuy, president of the European Council.
Even so, Georgia’s western allies are alarmed by the prosecution of former officials of the opposition party, the United National Movement, as they fear a political witch-hunt. These worries came to the fore when the prosecutor summoned the former president, Mikheil Saakashvili, for questioning on March 22nd. Whatever the legal basis for the move, it was politically short-sighted: Georgia’s closest allies within the EU, such as Poland and the Baltic countries, are also Mr Saakashvili’s firmest supporters.
The path towards Europe remains full of pitfalls. The potential for pressure from Moscow highlights how much Georgia needs unity. Yet Georgians have a talent for in-fighting: during the anti-gay rights rally on May 17th, two homophobes started beating each other up, each accusing the other of being gay.
economist.com
Over 5.6 Million Reads Adam Gonzalez at May 23, 2014