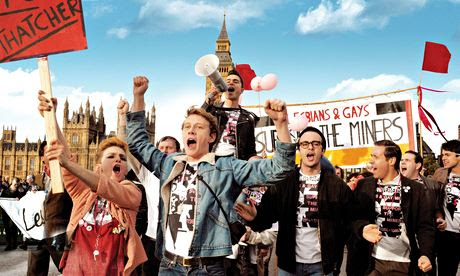 George Mackay and pals in Pride. Photograph: Nicola Dove
Once Billy Elliot had grown up to join the cast of an all-male Swan Lake, it may have left us with the feeling that there were more stories to tell about the miners' strike of 1984/1985 and more films to be made about the birth of progressive politics in this country.
Matthew Warchus's Pride is an impassioned and distinctly loveable movie about this period, a film on the unfashionable subjects of empathy and solidarity. It is warm and witty, with terrific performances; Stephen Beresford's script is fast and funny and there's a rousing musical score from Chris Nightingale.
The film is based on the true story of pioneering gay campaigners in London who supported the strikers with the "Pits and Perverts" benefit concerts - and in so doing had to overcome tribal suspicions among both London's gays and the miners of south Wales.
It's a movie with poignant resonances in the Britain of 2014, where the miners' strike ended with generations who have never known work, mendicants of a state which has resolved to rely for its power on imported coal and fracking. Yet it is also a country with gay marriage - supported, to his great credit, by a Conservative prime minister.
Warchus's film takes us back 30 years before all this, making a defiant case that the miners' strike was not simply a Light Brigade charge into oblivion but a triumphant spur to gay rights and human rights, self-respect and pride. It has something to say to modern audiences grappling with identity politics and intersectionality.
Ben Schnetzer gives a gutsy performance as Mark Ashton, the campaigner who decides to break out of what he sees as the parochialism of gay politics and support the miners. He faces suspicion from those who see miners as a macho tribe who wouldn't lift a finger to help gays.
Mark raises some cash and finds a sympathetic Welsh mining leader to accept it: a dignified and intelligent performance from Paddy Considine as Dai. The gay campaigners include shy, semi-closeted Joe (George MacKay) who eventually gets a "discretely gay" badge and Warchus leaves it to us to judge if the spelling is correct or not. There's a witty queen played with sympathetic relish by Dominic West.
They travel to Wales to find the strikers are far more open-minded and worldly than they get credit for - wonderful contributions from Imelda Staunton and Bill Nighy, who uses his gift for taciturn shyness to glorious effect.
But, of course, there is also suspicion and homophobia. The notorious, ugly rant from Manchester's top copper James Anderton about Aids and gays "swimming around in a cesspit of their own making" is quoted, without attribution.
This a richly enjoyable film - and one that persuades you that the good guys might actually have won in the end.
Peter Bradshaw
theguardian.com,
Over 5Million Reads Adam Gonzalez at May 24, 2014

Email ThisBlogThis!Share to TwitterShare to FacebookShare to Pinterest
Labels: Cannes