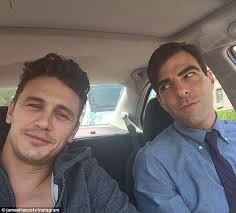 Even though he’s straight, it sometimes seems like James Franco, the star of Milk and Howl and director of Interior. Leather Bar, is this generation’s foremost gay actor, toying with ideas of gender and sexuality in his artwork and even his Instagram account. It’s commendable he wants to try something slightly different in I Am Michael, a new movie where he plays a gay activist who decides he’s not gay anymore. Sadly, just like the movie’s main character, the film around him – the feature debut of Justin Kelly – is fatally unsure of its own identity.


Michael is Michael Glatze, who moves to San Francisco with his partner, Bennett (Zachary Quinto) and lands a job at XY magazine, a seminal title for young gay men who came of age in the late 1990s. Our plot is taken from an amazing New York Times Magazine story by Benoit Denizet-Lewis, who worked with Glatze at XY. The couple return to Bennett’s native Halifax where Michael is listless and slowly becoming unmoored without a job or greater purpose.
Michael starts having panic attacks, plagued by the fear it’s the same heart disease that killed his father when Michael was young. He becomes increasingly interested in Christianity as an answer to his acute existential crisis. He eventually decides that he no longer wants to be gay and ends up at a Bible college in Wyoming where he meets and marries a fellow student (Emma Roberts).
The movie wants to show Michael as someone who needs to follow his own path, who can’t be defined by labels. He also wants to be a leader of people, whether gay youth or members of his congregation. But by the time it gets around to such interesting territory, the movie is spent. It shows his conversion not as one of conviction but as an ill that besets a young man without direction. And with that it becomes, in essence, identical to some of the evangelist propoganda dished out on public transportation. If you’re not careful, gays, Jesus will come along and take away your Tori Amos posters.
The structure of the movie doesn’t help its propensity to preach. It’s slow and plodding, set up in a series of flashbacks, the years flagged on title cards, to further arrest the pace. The dialogue is stilted and full of cliché. Franco, unusually stoic, doesn’t give Michael much of an inner life and his conversion is shown less by anything the character does and more by his hair colour and style of dress. Quinto is flat in a thankless, underwritten role.

Part of the problem resides in the feeling that Kelly isn’t convinced Michael isn’t really straight – something the movie follows. It feels like it’s hewing too close to both an agenda and the truth of the story instead of exploring the emotional and intellectual truths that lie beneath it. There would be an interesting movie to be made about the interplay between identity, sexuality, religion and self-identity,in the events and intellectual leaps it would take to turn a gay activist into a proselytizer for heterosexuality. But I Am Michael does not manage it. In a film where the Bible convinces a man to rearrange his entire life, it commits the cardinal sin of being dreadfully dull.