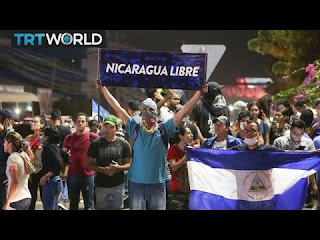 The UN Human Rights Office accused the Nicaraguan government of violating international and human rights laws in a scathing report published on Wednesday. After massive street protests shook the foundations of President Daniel Ortega’s authoritarian regime in April, police and armed parapolice groups cracked down with disproportionate force, including extrajudicial killings, forced disappearances, sexual violence and torture.
Why it matters: The UN says that Nicaragua’s political crisis has left at least 300 dead and 2,000 injured, among a population roughly equal to that of the D.C. metro area. U.S. and Latin American diplomats worry that the instability could spawn a refugee crisis and create a power vacuum that might be filled by transnational organized crime groups.
Ortega, whose government dismissed the UN report in an official response, says that his country is doing perfectly fine. After repressing peaceful protests in April and May, police and armed shock troops conducted a “cleanup” operation during which they violently removed the barricades and roadblocks erected by protestors across the country. By July, Ortega started claiming victory over “terrorists” and “coup-plotters” and told foreign media that the country’s “normalization” was proceeding apace.
By contrast, the UN report shows that the situation in Nicaragua is anything but normal. Most of the deaths occurred during the “cleanup” between April and July. However, the government continues to employ myriad forms of persecution and retaliation in order to silence dissent. Hundreds of Nicaraguans have received terrorism charges and been detained without due process. The “systematic” persecution of dissidents compounded by pro-government intimidation has resulted in "a climate of widespread terror, frustration and despair." Unsurprisingly, the report also notes an exponential increase in Nicaraguan asylum seekers abroad.
What's next: The UN Human Rights Office has called on the Ortega regime to cease the repression and disband the parapolice forces. More notably, it has urged the UN Human Rights Council to consider creating an independent probe into the matter. Such an extraordinary step, if taken, would elevate the crisis in Nicaragua to the same symbolic level as other, more well-known cases — such as Syria's and Gaza's — that have recently been the subject of UN inquiries. Talks between the government and opposition groups have stalled, but increased international scrutiny and diplomatic isolation could help push Ortega back to the negotiating table.
Mateo Jarquín is a doctoral candidate in the department of history at Harvard University.
Over 5Million Reads Adam Gonzalez at August 31, 2018