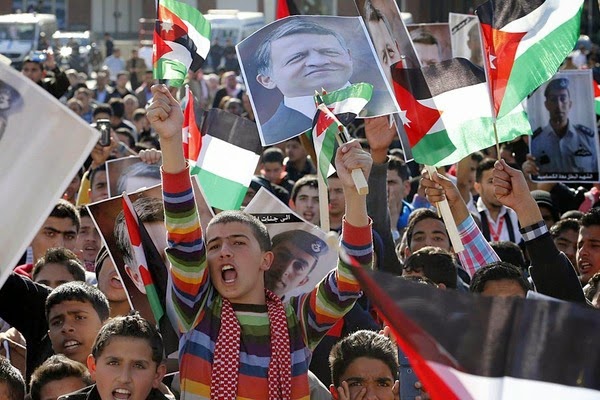 Jordan's King Abdullah has vowed to take tough action against Islamic State militants following the group's gruesome killing of a Jordanian pilot captured after his plane went down during a mission targeting the militants in Syria.
The murder of pilot Muath al-Kaseasbeh triggered international condemnation and prompted Jordanian authorities to execute two Iraqi prisoners, failed suicide bomber Sajida al-Rishawi and al-Qaida operative Ziad al-Karbouly.
King Abdullah stressed that Jordan would be "relentless" in the war against Islamic State.
"We are waging this war to protect our faith, our values and human principles. And our war for their sake will be relentless and will hit them in their own ground," he said.
Jordan hanged al-Rishawi, an Iraqi woman sentenced to death for her role in a 2005 suicide bombing in Amman, and l-Karbouly, another Iraqi with ties to al-Qaida.
The Islamic State group had demanded al-Rishawi's release as part of a prisoner exchange, but Jordan refused to move forward without proof that pilot al-Kaseasbeh was still alive.
A video emerged online Tuesday purporting to show the pilot locked inside a cage, then a militant lighting a trail of gasoline that traveled to the cage and burned him to death.
"The U.S. intelligence community has no reason to doubt the authenticity of the video," said Brian P. Hale, director of public relations for the U.S. Office of the Director of National Intelligence.
Jordan said the pilot was apparently killed a month ago. He was captured in Syria after his plane went down while flying as part of the U.S.-led coalition conducting airstrikes against Islamic State targets.
"This is cowardly terror by a criminal group that has no relation to Islam," a grim-looking King Abdullah told the Jordanian people from Washington on Tuesday. "The brave pilot gave his life defending his faith, country and nation, and joined other Jordanian martyrs."
President Barack Obama, who met briefly with King Abdullah, said the video is just one more indication of the Islamic State's "viciousness and barbarity."
"And it, I think, will redouble the vigilance and determination on the part of a global coalition to make sure that they are degraded and ultimately defeated," the president told reporters.
United Nations Secretary-General Ban Ki-moon condemned the pilot's murder and said Islamic State is a terrorist group with no regard for human life.
Jordan's participation in the airstrikes against fellow Muslims has been unpopular within the country.
But General Lloyd Austin, the head of U.S. Central Command, which oversees the coalition fighting the militants, said Tuesday Kaseasbeh "served his country courageously and honorably," and was an important member of the team fighting the Islamic State group.
Earlier Tuesday, U.S. Secretary of State John Kerry and Jordan's Foreign Minister Nasser Judeh signed a memorandum of understanding under which the U.S. will provide $1 billion a year to Jordan through 2017.
Kerry said the U.S. also is adding to the $467 million it already has contributed to help Jordan care for refugees from both Syria and Iraq.
voanews.com
Pic:Reuters
Over 5.6 Million Reads Adam Gonzalez at February 06, 2015