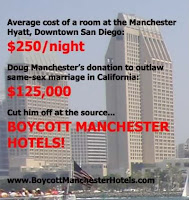 LGBT groups, union groups, and allies will be protesting this Saturday, January 9th against the Manchester Grant Hyatt Hotel in San Diego, California. There have been numerous demonstrations at the resort due to the fact that the owner Doug Manchester donated $125,000 to ban same-sex marriage in the state.

The wildly successful protests have entered into their second year and organizers estimate the hotel has incurred over 8 million dollars in losses as a result of their boycott and protests.